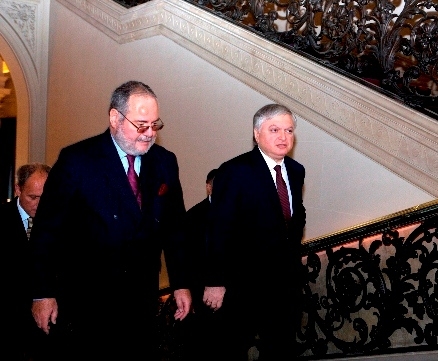 
YEREVAN, SEPTEMBER 2, ARMENPRESS: Foreign affairs minister of Armenia Edward Nalbandian held a meeting in Paris with OSCE Minsk Group Co-Chairs Robert Bradtke, Igor Popov, Jacques Faur and Personal representative of OSCE Chairperson-on-office Andrzej Kasprzyk in Paris on September 2. Armenpress was informed from Armenian Foreign affairs ministry that the only issue of the meeting's agenda was the situation resulted from Hungarian-Azerbaijani shameful deal with not only its negative consequences on negotiating process but also on security, stability and peace in the region.

Edward Nalbandian mentioned that Azerbaijan fragrantly violates international law, international conventions and agreements and its obligations, lays obstacles for the efforts of Co-Chairs directed to the peaceful settlement of Nagorno-Karabakh conflict, continuously rejects proposals, makes unraveled all initiatives directed to the formation of mutual confidence, presents a serious treat to peace and stability in the region.