Medieval bridge of Garni will be put in operation in autumn 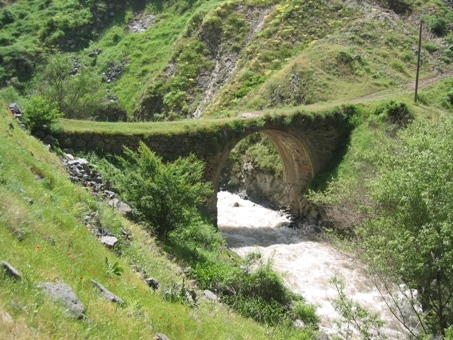 
, AUGUST 10, ARMENPRESS: The built in the 11th century will be put in operation in autumn. The restoration works have started since July 2 and the first stage will be finished on August 15. The responsible persons of Construction Company assure that it will be fully ready even earlier of planned term, earlier than November. The basis of reconstruction of this historical and cultural monument was put in September of last year by the memorandum “Keeping cultural values by ambassadors” signed by Minister of Culture Hasmik Poghosyan and ambassador extraordinary and plenipotentiary of USA to Armenia John Heffern. American embassy for that purpose provided 110 000 US dollars. Armenpress was informed that representatives of embassy in and ministry of culture visited Garni, got acquainted in place with the reconstruction works.

Attache of the department of public relations of embassy in Armenia Sean O’Harra assured that is a blessed country as it has many historical and cultural values which must be kept. “The monument which exists for already 800 years will be steady at least for 800 more years. This monument from one side is a bridge between and and from the other side between the past and future of ” he mentioned. The representative of the embassy considered the process of the works satisfactory.