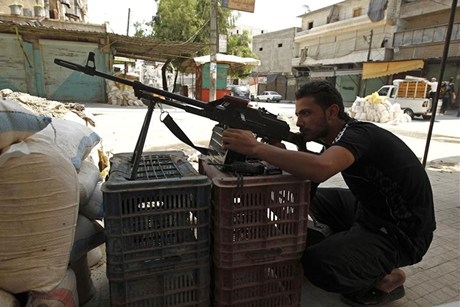 
, AUGUST 7, ARMENPRESS: The shootings on August 6-7which took place near districts of which are mostly populated by Armenians are not directed against Armenians. Armenpress was informed about this from the press secretary of national primacy of Aleppo Jirayr Reisyan. “This morning I woke up from the sounds of shootings which are very close to Armenian populated districts. The clashes and shootings which are continued at this moment take place in the centre of the city where live many Armenians but they can not be named Armenian districts” highlighted Reisyan. He had a difficulty to mention whether the panic has increased among Syrian Armenians or not as they can not come out of the houses.

“Only after this tension we can talk with Armenians. Though these attacks are not directed against Armenians but clashes can be difficult for Armenians too” mentioned Reisyan. He said that there is not any direct damage to Armenian institutions and churches. He also rejected the rumors about the fact that Saint Gevorg Armenian Church had stopped operating.

According to Syrian centre of Human Rights Defense Organization the ongoing clashes have resulted in the death of over 19000 people. By the info of Arab mass media more than 12000 were peaceful civilians, while more than 5000 were security officers. Among the victims there were 7 Armenians, 2 of which were the Syrian Army militaries. Because of lasting disturbances in Syria a number of people are leaving the country, getting refugee status in other countries. Recently Syrian Armenian Community representatives are also quitting the state. The applications submitted from Syria by our compatriots are being envisaged by accelerated procedure, at least within ten days.

11:56, 01.27.2020
Viewed 2592 times Pilot of helicopter that crashed in US killing basketball legend Kobe Bryant was of Armenian descent