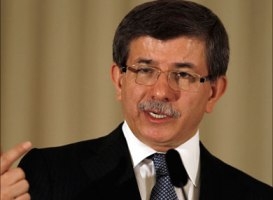 
Yerevan, July 30, ARMENPRESS: Strongly concerned about the Kurds control over the Syrian northern parts, the Turkish Foreign Minister Ahmet Davutoglu will visit the Kurdistan capital Erbil, where he will ask the Kurdistan leader Masoud Barzani not to support the Kurdish autonomy in Syria. As “Armenpress” reports, the CNNTurk channel informs about this noting that Davutoglu will send three main messages to Barzani.

It is mentioned that Turkey is going to express concern about the PYD organization considered to be a Syrian wing of the Kurdistan Workers' Party (PKK) control over the 6 Kurdish regions bordering Turkey.

In the interview with TV channel Kanal 7, Davutoglu stated that during the meeting with Barzani he should outline Ankara’s position that there should not be any terroristic group, Erbil should not support the PYD groups clashing with the Syrian opposition and any ethnic or religious institution should not be created in the north of Syria.

Davutoglu mentioned that after creating a “reliable” state structure in Syria, Ankara will support “the Syrian Kurds to receive all the constitutional rights of that country”.