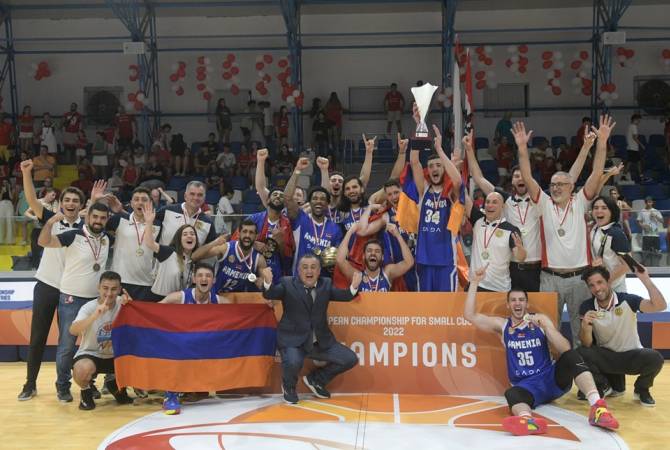 
YEREVAN, JULY 7, ARMENPRESS. Tony Safoian, the President and CEO of SADA, the marquee sponsor of the Armenia national basketball team and a leading Google Cloud partner, addressed a video message, congratulating the team on the victory in the European Championship for Small Countries.

On July 3, the Armenian national basketball team beat Malta 84-68 in the final and was named the winner.

“I just want to congratulate our Armenian national basketball team for winning the Small Countries Championship, bringing home the gold. Thank you so much to the Armenian basketball association, thank you so much to coach Rex, Chris and Andre on winning the MVP. It was such a pleasure to be a part of this journey with you. It was a great honor. You made me proud, you made all of us at SADA proud and you made not only Armenia proud but every Armenian all over the world. You inspired thousands and thousands of kids. It was such a great part of our journey together. Let’s keep rolling. We are just getting started with basketball in Armenia”, he said.

In his turn Secretary General of the Basketball Federation of Armenia Artur Nazaryan said: “This success would not have been possible without SADA’s support. As you know, the SADA Cup tournament was successfully held in Yerevan, and the Cup had great feedback. At the moment we are thinking of making such a tournament traditional and want to engage much more participants. We will soon discuss with our main sponsor SADA the possible format of such a tournament next year”.

The Basketball Federation of Armenia and SADA have signed this year a cooperation agreement aimed at promoting the national team and developing basketball in Armenia.