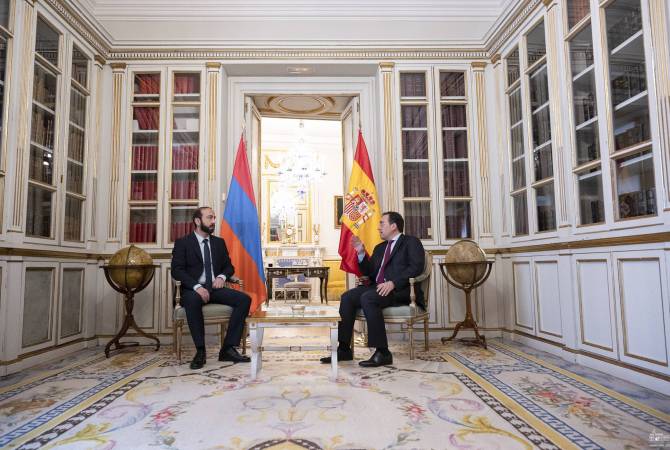 
YEREVAN, JULY 6, ARMENPRESS. Armenian Foreign Minister Ararat Mirzoyan, who is on a working visit to Madrid, had a meeting with Spanish Foreign Minister José Manuel Albares Bueno on July 6.

As ARMENPRESS was informed from the press service of the MFA Armenia, congratulating each other on the occasion of the 30th anniversary of the establishment of diplomatic relations between the two countries, the Foreign Ministers noted with satisfaction that during the past three decades, effective cooperation between Armenia and Spain has been formed based on traditional ties and common values.

The interlocutors attached importance to the activation of political dialogue and high-level mutual visits between the two countries, expressing mutual willingness to take steps to deepen cooperation.

The sides exchanged thoughts on the full realization of the cooperation potential in the fields of trade and economy, industry, transport and infrastructure, renewable energy, and information technology. The parties agreed that the organization of business forums and the expansion of ties between business circles will promote bilateral cooperation in these areas.

In the context of activation of human contacts and mutual recognition between Armenia and Spain, the strengthening of ties in the field of tourism was also emphasized. The expansion of educational exchanges and opportunities to study each other's language and culture in both countries was emphasized.

Minister Mirzoyan highly appreciated the decision of the Spanish government to open a resident representation in Armenia, expressing confidence that it will give a new impetus to interstate relations.

During the meeting, reference was made to the cooperation of the two countries on multilateral platforms, as well as within the Armenia-EU partnership.

Regional security and stability issues were also discussed. Foreign Minister of Armenia presented to his Spanish counterpart the situation in the Nagorno Karabakh conflict zone and the position of the Armenian side on the processes aimed at establishing peace and stability in the region, as well as on the normalization of relations between Armenia and Azerbaijan.

Referring to the humanitarian problems caused by Azerbaijan's aggression against Artsakh, the Armenian FM emphasized that Azerbaijan, in gross violation of international humanitarian law, continues to hold hostage Armenian prisoners of war and civilians, as well as leads a policy of destruction and falsification of origins of the Armenian historical-cultural heritage in the territories that have passed under its control.

The interlocutors also referred to the normalization process of Armenia-Turkey relations.

The Foreign Ministers issued statements for the press based on the result of the talks.