Trade and economic ties between Armenia and Spain reach to the sky. Minister of Foreign Affairs of Spain | ARMENPRESS Armenian News Agency

Trade and economic ties between Armenia and Spain reach to the sky. Minister of Foreign Affairs of Spain 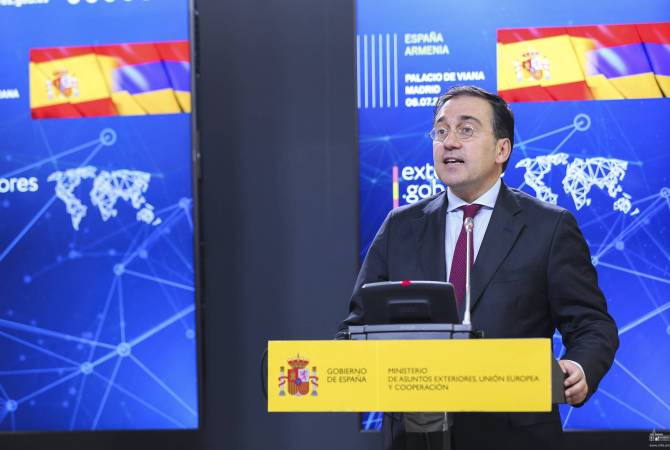 
YEREVAN, JULY 6, ARMENPRESS. The opening of the resident diplomatic representation of the Kingdom of Spain in Yerevan, which will take place in the near future, shows Spain's interest in strengthening its relations with Armenia, the correspondent of ARMENPRESS reports that the Spanish Foreign Minister José Manuel Albares Bueno announced after meeting with Armenian Foreign Minister Ararat Mirzoyan.

"This year, in 2022, we are marking the 30th anniversary of the establishment of our diplomatic relations, and this is one of the reasons for my Armenian colleague's visit. During these thirty years, we have built and expanded our relations," said the Spanish Foreign Minister.

According to José Manuel Albares Bueno, his meeting with Ararat Mirzoyan and the Spanish government's decision to establish a Spanish resident diplomatic mission in Yerevan show Spain's special interest in strengthening its relations with Armenia and increasing the Kingdom's presence in the South Caucasus region.

"Our trade and economic ties have great potential and they literally reach to the sky, as the first Armenian satellite was sent into space in May of this year thanks to the joint project of Armenian and Spanish companies. There are also great opportunities for cooperation in various fields such as infrastructure, agriculture, transportation and renewable energy," said the Spanish Foreign Minister.

Armenian Minister of Foreign Affairs Ararat Mirzoyan is on a working visit to the Kingdom of Spain on July 5-7. Within the framework of the visit, the Armenian Foreign Minister had meetings with the President of the Spanish Congress of Deputies Meritxell Batet and Foreign Minister José Manuel Albares Bueno. A meeting with Secretary General of the United Nations World Tourism Organization Zurab Pololikashvili is also scheduled.