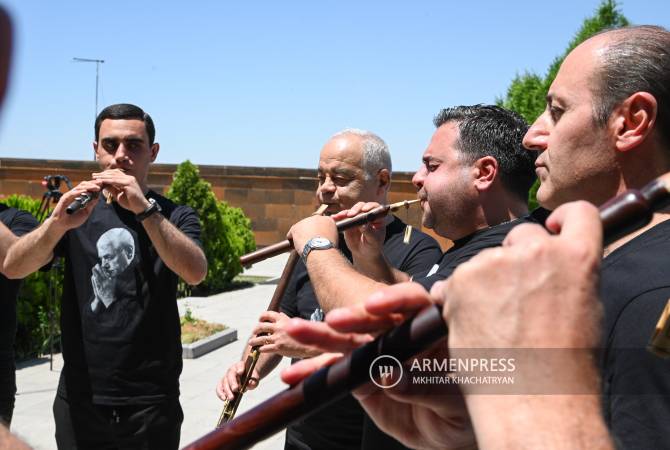 
YEREVAN, JULY 6, ARMENPRESS. It is planned to hold an international festival of duduk players in Yerevan next year, which will be titled “Jivan Gasparyan” in memory of the legendary Armenian duduk player Jivan Gasparyan, Minister of Education, Science, Culture and Sport of Armenia Vahram Dumanyan said during the inauguration ceremony of the bust of Jivan Gasparyan in Yerevan.

“I share the view that Jivan Gasparyan’s play is also a player. It was not a coincidence that he was bestowed with the title of the King of Duduk by the public. And the ministry is going to organize an international festival of duduk players, named “Jivan Gasparyan”, next year”, the minister said.

In his turn Deputy Minister Ara Khzmalyan said the most effective way of preserving memory is to keep it alive. “Jivan Gasparyan is the person who dedicated his entire conscious life to the popularization and internationalization of our national instrument, the duduk. I think that the greatest appreciation of his merits and past path will be to have an international festival of duduk players named after him. As duduk is included in UNESCO list, it’s very important for Armenia to have an international project which will regularly confirm that it is the owner of that instrument”, he said.

He informed that they present the idea of the festival for the first time and are going to discuss it also with the family of the legendary duduk player.