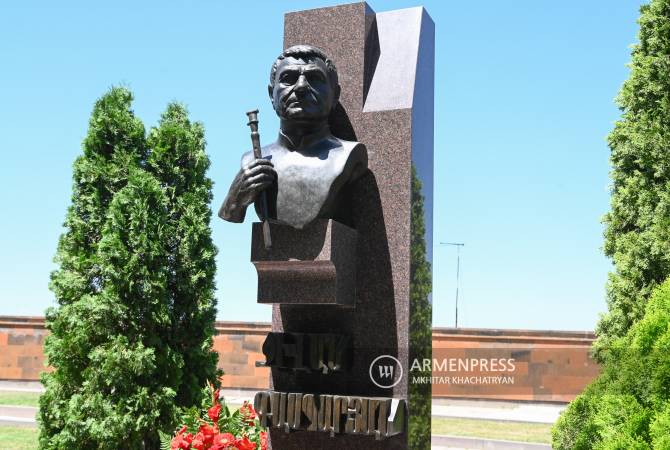 
YEREVAN, JULY 6, ARMENPRESS. The bust of legendary Armenian duduk player Jivan Gasparyan was inaugurated today at Yerevan’s Komitas Pantheon on the occasion of the 1st anniversary of his death. Sculptor Aleksan Babayan is the author of the bust.

Jivan Gasparyan died last year at the age of 92 in USA.

His grandson, Jivan Gasparyan Jr., played duduk at the inauguration ceremony. He said that his grandfather has long spread the melodies of duduk worldwide, by popularizing the Armenian music.

“My grandfather used to say: either you need to be good or not play at all. It was a great responsibility for me. His trust was inspiring me. He was saying it’s important how a person leaves life”, he said.

A number of events, concerts and initiatives dedicated to the legendary duduk player are planned this year not only in Armenia, but also in Russia.

Sculptor Aleksan Babayan said that while creating the bust he has tried to do everything to make it similar to Jivan as much as possible.

Minister of Education, Science, Culture and Sport Vahram Dumanyan in his turn said that Jivan Gasparyan has raised the voice of duduk to such a level that today “we all proudly state in different corners of the world that this is our national instrument”.