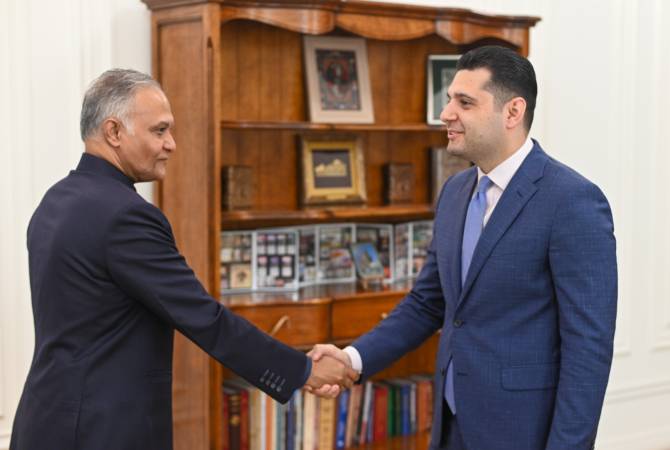 
YEREVAN, JULY 4, ARMENPRESS. Deputy Prime Minister of Armenia Hambardzum Matevosyan received today the Secretary for the West of the Indian Foreign Ministry Sanjay Verma. The latter is in Armenia to participate in the 8th session of the Armenian-Indian intergovernmental commission on cooperation in the fields of trade, economy, technology, science, education and culture.

Indian Ambassador to Armenia Kishan Dan Deval, Deputy Minister of Foreign Affairs of Armenia Mnatsakan Safaryan and others were also present at the meeting.

Welcoming the guests, Deputy Prime Minister Matevosyan highly appreciated the holding of the 8th session of the Intergovernmental Commission in Armenia after a certain pause and emphasized that it is a good opportunity to promote the interstate relations of the two countries in a number of directions, especially in the fields of trade, economy, healthcare and education.

During the meeting, among other issues, the parties also discussed the prospects of implementing international transport communication projects in the region.

Deputy Prime Minister Matevosyan emphasized that Armenia seeks a more ambitious agenda with its Indian friends, ready to activate the entire Armenian-Indian cooperation at the institutional level and in terms of mutual contacts.

Informing that the Armenian Government is making large investments in the direction of infrastructure development, Hambardzum Matevosyan noted that he also expects the active involvement of Indian construction companies in these large-scale tenders.

At the end of the meeting, the parties expressed readiness to develop the existing relations between the two countries.