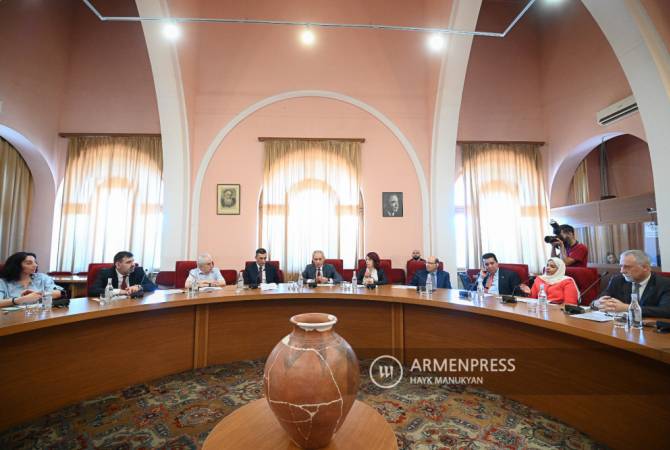 
YEREVAN, JULY 4, ARMENPRESS. The Institute of Oriental Studies of the National Academy of Sciences of Armenia organized an international conference today titled “The Arab states of the Gulf and the Armenian communities: current trends and issues”, aimed at discussing the cooperation opportunities between Armenia and the Arab states of Persian Gulf, as well as the development tendencies of Armenian communities in these countries.

A number of diplomats, representatives of academic circle were attending the conference.

In his remarks Armenia’s Ambassador to Tunisia and Morocco Arshak Poladyan said that the region, they are going to talk about today, is quite an interesting region in the East, where the interests of superpowers clash.

“Oil and religious factor in this region really turned into a political factor, and the region is interesting in this respect. I want to note that thanks to major efforts we managed, after Armenia’s independence, to start the process of establishing diplomatic relations with the Arab states of the East, and by 2000 we already had diplomatic relations with almost all Arab countries of the Gulf, except for Saudi Arabia, but we hope that we will manage to create new relations also with this country by the end of the year”, he said.

“I know that the respectful participants will touch upon the UAE’s Armenian community, the achievements and current challenges. I have prepared a presentation on tolerance and co-existence in the United Arab Emirates. The UAE attaches big attention to tolerance and values in order to strengthen its positions as a global center of tolerance that is creating a respective environment for different cultures of the world, is becoming a homeland for all those nations who live in harmony and work on its land”, Ahlam Rashed Al Salami said.

Dean of the Faculty of Oriental Studies at the Yerevan State University, Ruben Melikyan, called this conference another proof that Armenia is a superpower of Orientalism.

“I don’t know when Armenia will become a political, economic and military superpower, but I have no doubt that it is a superpower of Orientalism”, he said, adding that these steps and studies could contribute not only to the development of scientific issues, but also they have a very important significance for the region.