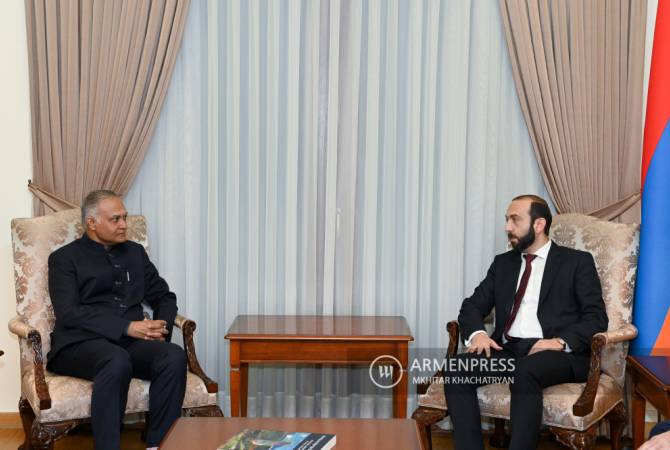 
YEREVAN, JULY 4, ARMENPRESS. The Secretary for West of the Ministry of Foreign Affairs of the Republic of India Sanjay Verma arrived in Armenia on July 4 for the 8th session of the Armenian-Indian Intergovernmental Commission on Cooperation in the fields of Trade, Economy, Technology, Science, Education and Culture.

Before the launch of the session, Sanjay Verma met with Armenian Foreign Minister Ararat Mirzoyan at the Foreign Ministry of Armenia.

In his opening remarks Armenian FM Ararat Mirzoyan welcomed his Indian colleague and all participants of the session, stating that the comprehensive development and deepening of the relations with India are among Armenia’s foreign policy priorities.

“It’s glad to see that India is registering significant achievements today with its vibrant democracy and dynamic economy in many areas, which contributes to raising the country’s reputation globally. Armenia also highly values India’s stabilizing activity in these times of global shocks. I should praise the fact that the traditional warm relations and mutual support between our nations, dating centuries, continue strengthening, and the inter-state ties continue expanding and deepening”, the FM said.

He called the arrival of the Indian delegation to Armenia symbolic as this year the two countries are celebrating the 30th anniversary of the establishment of diplomatic relations.

According to Mirzoyan, a lot of time has passed since the last session of the Armenian-Indian Interovernmental Commission, but the sides have carried out major works recently for developing the bilateral relations and cooperation. He reminded that mutual visits at a level of high-ranking officials have taken place recently, adding that there is an active cooperation within international organizations and that Armenia and India have also organized business forums and meetings.

Particularly, Indian Foreign Minister Jaishankar visited Armenia in October 2021, during which an ambitious roadmap of Armenian-Indian cooperation has been developed. This year in April the delegation led by the Armenian Foreign Minister paid a visit to India. During the working visit Ararat Mirzoyan met with the leadership of India, which provided a good opportunity to continue the Armenian-Indian dialogue.

“We highly appreciate the fact that we visited India in April with quite serious economic proposals, by organizing business forums in New Delhi and Mumbai and thus, greatly promoting the cooperation between the business communities of our countries”, Ararat Mirzoyan said.

“I think our Indian colleagues will agree that we need to take actions to develop our partnership in information and communication technologies, pharmaceutics, science and education. I also want to note that defense, military-technical sectors, agriculture, transport, civil aviation and tourism also have a big potential and are very promising for both countries. The ongoing discussions on these directions will turn into practical agreements and new opportunities for our governments and businessmen”, the Armenian FM said.

In this context it’s worth mentioning India’s technical support to Armenia in high and information technologies field, particularly the establishment of the Armenian-Indian Center for Excellence in ICT in Yerevan, as well as the opening of two computer classrooms in two provincial schools.

Armenia and India are also effectively cooperating in the field of territorial development. In this respect FM Mirzoyan welcomes the signing of memorandum between the Armenian and Indian governments on providing grant support by India for the implementation of community development high efficiency programs. The signing will take place at the end of today’s session.

Minister Mirzoyan also highlighted the effective partnership between Armenia and India in humanitarian sector, which involves both educational and cultural programs. Currently, around 2200 Indian students study in Armenia, mainly in medical professions, and there is also an opportunity to improve and expand the educational exchange program.