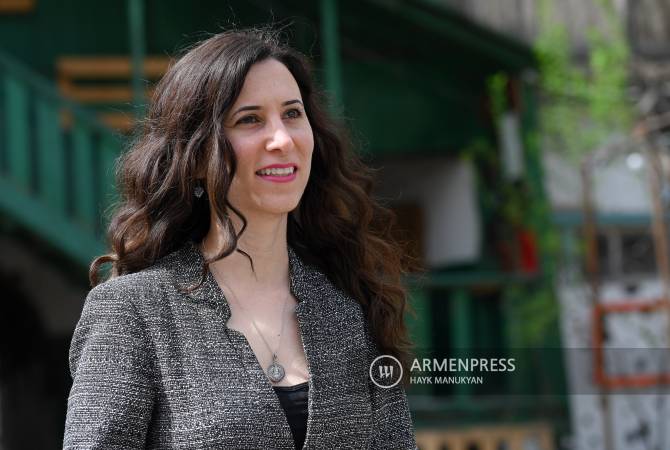 
YEREVAN, JUNE 30, ARMENPRESS. Tatev Manucharyan, a Diaspora-Armenian who moved to live in the United States of America at the age of 16, got an opportunity in 2021 to return back to Armenia within the framework of iGorts project and work at the Ministry of Environment by investing her experience and knowledge for improving the field and developing policies and programs.

In an interview to ARMENPRESS, Tatev said that she was born in Yerevan and later moved with her family to Los Angeles. After graduating from school there she studied political science in a university. Later Tatev moved to Europe, lived in the Netherlands and studied EU Legislation in her Master’s Degree.

“After graduating from the university in the Netherlands, I have worked in the same university as a researcher, as well as taught EU Legislation. I would like to state that I have always wished to return to Armenia, work here, and after the war my desire further intensified. I thought what I have done to prevent such phenomena? In other words I left the country and didn’t bring any contribution to my homeland, expect from visiting as a tourist. In fact, I have always dreamed of coming to and living in Armenia, working here, and thus, I decided to come and make my dream true, by contributing to the development of my country”, she said.

Touching upon the problems she faced in Armenia, Tatev said she almost didn’t have any problems, but mentioned some phenomena. “As my work is connected with environment, I would like very much if the residents of Yerevan and the population of Armenia in general show more care to the city and the environment. It’s very sad to see garbage everywhere, in cities, in nature, in our beautiful sites, on roads. I am more concerned about the waste management issue and the air pollution in Yerevan, but as for other issues, I got used to them”, she said.

Tatev says different countries have advantages both good sides and bad sides, but you don’t feel at home in any country than in your birthplace. “I was born and grew up in Yerevan, and this feeling is very very important for me. Being here and feeling like home is very nice”, she said.

As for the plans for the future, Tatev Manucharyan said they are not clear yet as she has not completed the iGorts program, it will end in September 2022. “It can be said the idea of staying in Armenia has always been on my mind. I hope there will be more opportunities at this period so that I can work and live in Armenia. In any case after the war I understood that I cannot help my homeland only with visiting Armenia for a certain time and as a tourist”, she noted.

Talking about her dreams, she said: “Perhaps now my biggest dream is to see Armenia strong, to have a country which we will be proud of. Armenia has many good sides, but I see potential in all areas that is not used much. I would like to see more investments, both public and private, in education sector, so that we could be leaders in this and other areas. My desire is for us to be a leader in the region in all areas. The issue of development of provinces is also very important for me. We could develop our country only by developing our provinces”, she stated.