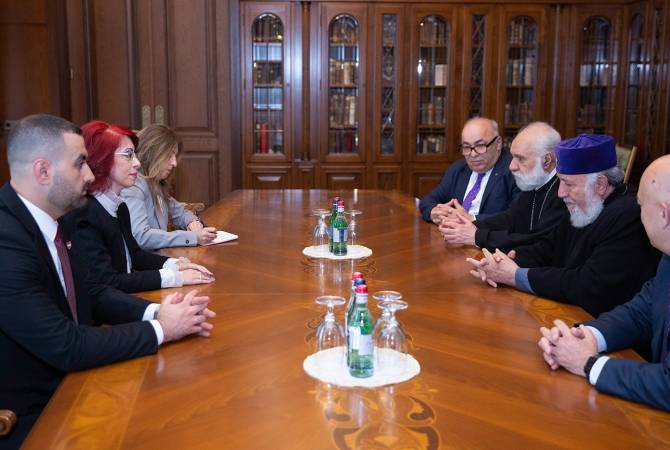 
YEREVAN, JUNE 27, ARMENPRESS. Supreme Patriarch and Catholicos of All Armenians Karekin II received the newly appointed Ambassador Extraordinary and Plenipotentiary of the Syrian Arab Republic to Armenia Nora Arisian at the Mother See of Holy Etchmiadzin on June 27.

The Mother See of Holy Etchmiadzin informed ARMENPRESS that His Holiness, congratulating the Ambassador on the occasion of her appointment, wished an effective mission for the benefit of the continuous strengthening of the centuries-old friendly relations and cooperation between the two peoples. His Holiness spoke with satisfaction about the Armenian-Syrian historical ties, emphasizing the important role of the Armenian community in Syria in strengthening them.

During the meeting, the Catholicos of All Armenians referred to the tragic losses and devastation caused by terrorist attacks in Syria and the 44-day war in Artsakh, expressing confidence that the two friendly nations will overcome the challenges they face with a spirit of optimism and strong faith.

His Holiness also expressed gratitude to the Syrian authorities for the caring attitude towards the Armenian community.

At the end of the meeting, the Catholicos of All Armenians wished the Ambassador fruitful activity for the strengthening of the Armenian-Syrian relations.