150-meter dolma to be made during traditional festival in Armenia 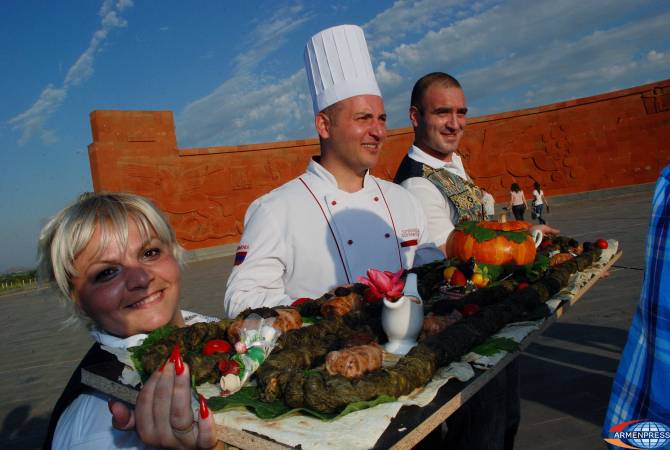 Sedrak Mamulyan, Chairman of “Preservation and Development of Armenian Culinary Traditions” NGO, told Armenpress that the number of pavilions is gradually increasing as 27 teams are participating in the festival this year. One of the teams decided to make a 150-meter dolma. Nearly 70  types of dolma will be displayed in the pavilions.

The teams will compete for “Best Taste”, “Best Look”, “Best Idea” categories. The participant with the most points will receive the Grand Prix.

Owners of restaurants, representatives of service sector, cooks and individuals from Gyumri and Tsaghkadzor will participate in the competition. There are teams who will make sweets.

This is already the third year the Dolma Festival is taking place in the Zvartnots Museum-Reserve. The aim, Mamulyan says, is also to present the Armenian cultural monuments to tourists. He said that the decision to hold the Dolma Festival was made in 2011 following the statement of the Azerbaijani President Ilham Aliyev, who talked about their cultural features, touching upon also dolma.

“We aim at raising the attractiveness of our country, creating a tourism atmosphere”, Sedrak Mamulyan said, adding that they achieved their goal as tourists are looking forward to the festival.

The number of festival participants reaches around 3000-5000, but there was a year when they had a record hosting up to 30,000 participants.