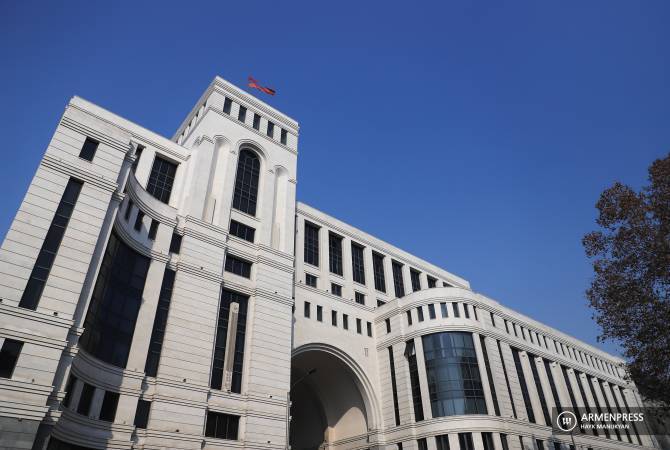 
YEREVAN, MAY 28 ARMENPRESS. The statements made by the president of Azerbaijan Ilham Aliyev on May 27 once again testify to the continuation of the policy of un-constructiveness of the Azerbaijani side, the arbitrary, incorrect interpretations of the agreements, and the aggressive, belligerent policy, ARMENPRESS reports, reads the statement of the Foreign Ministry of Armenia.

"The aspirations for the sovereign territory of the neighboring state, the use of force to achieve these goals are nothing but contempt for the norms of international law, and seriously question the sincerity of Azerbaijan's intentions for peace in the region.

The Ministry of Foreign Affairs of Armenia considers it necessary to reaffirm the principled position of the Armenian side that the talks on normalization of relations between Armenia and Azerbaijan should be held on the basis of proposals of both sides, which should address the whole agenda of issues, including the final settlement of the Nagorno Karabakh conflict”, reads the statement of MFA Armenia.

According to the Foreign Ministry, "with the speculations of the Azerbaijani side, an attempt is made to present the Nagorno Karabakh issue as a territorial dispute, while it is about the realization of the rights of the Artsakh Armenians and excluding the danger of ethnic cleansing”.

"In this regard, we remind you that the international mandate of the OSCE Minsk Group Co-Chairs received in 1995 to support the comprehensive settlement of the Nagorno Karabakh conflict continues to exist.

We call on the leadership of Azerbaijan not to torpedo the discussions in the existing dimensions with belligerent, maximalist rhetoric.

At the same time, we call the attention of the international community to the statements made by official Baku, expect the unequivocal attitude of international partners, in the conditions of which it will only be possible to achieve stability and peace in the South Caucasus," the statement reads.