Glovo will deliver food, medicine, even a forgotten key in 30 minutes from anywhere in the city: Co-founder on company | ARMENPRESS Armenian News Agency

Glovo will deliver food, medicine, even a forgotten key in 30 minutes from anywhere in the city: Co-founder on company 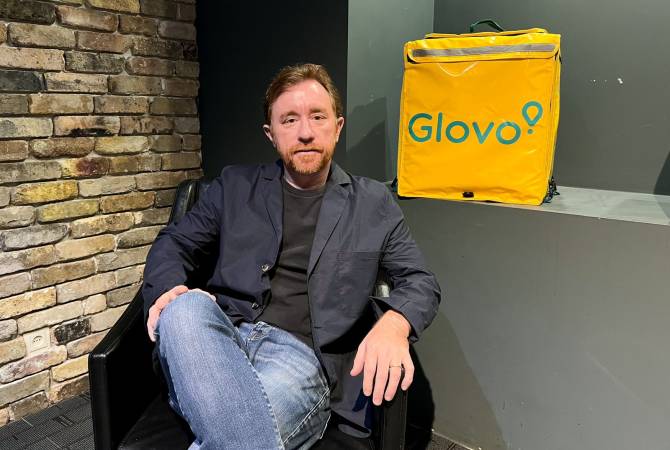 
YEREVAN, MAY 27, ARMENPRESS. The key to success of Glovo, a leading online delivery company, is the great service. Glovo will purchase, pick up, and deliver food, pharmacy, even a forgotten key ordered through its mobile app in 30 minutes.

Glovo co-founder Sacha Michaud gave an interview to ARMENPRESS, talking about the services offered by the company, the advantages and their operation in Armenia.

-Mr. Michaud, it will be interesting to hear the story of Glovo from you. When and where did the story of the company start?

-So it started in the beginning of 2015, so only seven years ago, in Barcelona, Spain, which is our headquarters where we founded the company. It’s two founders – Oscar and myself. We launched the first version of the app in Barcelona in March 2015. Since then we grew very quickly, we expanded inside Europe, so Italy, Portugal. More recently, we have been moving to Eastern Europe with Poland, the Balkan regions and of course this region, in Georgia, Kazakhstan, Kyrgyzstan and more recently Armenia we launched six months ago. We are today in 25 countries worldwide, including Africa, 7 countries in Africa we are expanding, we are in 1500 cities, we have 3500 employees, we have 75000 active couriers who deliver every month, and we have 150000 partners. These are stores and restaurants, retailers, stores and restaurants in the streets who are selling on our platform and we have 8 million active customers. These are people buying from these stores online. So we have grown very quickly and in a small amount of time and we are really happy as well to be here in Armenia.

- As your company works in 25 countries, are you planning to enhance this year as well? If yes, what countries?

-So at the moment we haven’t got any countries to be identified, we are looking in the region both here and Africa which are the two regions where we are expanding to look for possible future countries. We are doing this expanding, our footprints in the countries where we operate. So good example would be today, we are in two cities in Georgia and Armenia. But the idea is to expand and launch new cities here. So we generally will expand the cities we are in a country to get more customers, more restaurants and stores.

-Glovo is not just a food delivery company. What additional services do you offer to consumers?

-We have been multi-category from day one which differentiated us from our competitors. Well, our competitors would focus on restaurant food, and only restaurant food, but since day one, so this is March 2015, we have always been multi-category. Restaurants are our largest category, but groceries are the second largest category. We worked with supermarkets, both large and small, large chains, but also specialized supermarkets with products, to think of many stores, wine stores, cheese stores, and also electronics is growing very quickly, and also pharmacy, we worked with pharmacies, local pharmacies, and then obviously any retail. Also fashion, clothes is becoming more and more important on the app. Generally, the way our customers use it is they know they want and we can go get it in the city, then they prefer us to go get it and them crossing the city, getting in a car, getting in a traffic, parking, we will do it in 30 minutes for pretty much the same cost as you are going to do it yourself. That’s the key, I think.

-How long Glovo has been working in Armenia and what does it offer to the consumers?

-We have been just over six months, we launched in September last year. I think we’ve bringing a really good quality of service. So it was very funny but when we launched in Armenia, we had customers ordering their lunch at 10:00 in the morning. And of course, we arrived in 30 minutes with a shawarma or a lunch food, and they said “this is too early” because they were used to two-hour delivery time or three. I think the first think is really good service, to give it what you order, and also our customers can see in every moment where the delivery is, so when they do the order, they know when the courier is picking up the goods in the store, they can see that, and they can see in Google Maps it crossing the city, and when it will exactly deliver. And I think that’s very important because you are doing things, you want to know exactly when it is going to arrive. So quality of service is our biggest thing. And second, I think, is having a great content. Content for us is having your favorite restaurant, not just a large chains, but a cool restaurant you really like or having the right stores, the supermarkets, the stores that you want. So I think, the best partners plus great service are our key to success.

-I think in being in so many countries, very different countries, very different cultures, very different languages, is being very local. So when we set up, we launch a company, a country, sorry, we set up, we get a local team to run the business. That’s not different in Armenia. We have got nearly 15 people here ready in the team. We are expanding that team. They understand the local cities, they understand the needs. We have been very urban company in the fact that we were part of the ecosystem of mobility so to know as well the dynamics of the city, of how traffic moves. So I think, that’s been the key to our success. The local team runs the business. Our business here in Armenia is very different to other countries because the team is identified. And I think this is our key to success.

-What’s the main difference of Glovo from other delivery services?

-I think being multi-category. I think bringing anything you want to the city. Our vision is to give everyone easy access to anything in your city. I think, our main thing is multi-category, in fact that I think it’s great ordering food and getting delivered, there are a lot of opportunities to order. But I think it’s amazing when you know you have an emergency, it’s 11:00 at nights, and your baby is crying, and you have no nappies, you can pick up Glovo and we will go pick you some nappies in 30 minutes there, that’s a wow moment, or  you forgot your keys, and a lot of people forget their keys, you will be surprised how many keys we move around city, that you get home, but left the keys at work, and then we will go pick up the keys and bring them or kids who come home from school who get the keys when their parents are working. And they can quickly order Glovo. So, we are an emergency-savior as well for needs, which I think is amazing and it gives us an emotional connection with our customer. We are not just a food delivery app who brings you a nice hot pizza, that’s cool, that’s not wow, what’s wow is the other stuff.

-Glovo is available in Yerevan and Gyumri. It is interesting to know on what parameters is your expansion strategy based? Do you have plans to expand and in what cities?

-Normally, and Armenia is no exception, we launch in the largest cosmopolitan city because the customer base is very digital, there are great restaurants and stores, so it generally fits, and then we expand to the largest cities depending on geography. We like university cities with young people who generally are very digital. So we are in two cities now, we are expanding to other cities in Armenia. I don’t have the definite list now of the cities, but generally we will start with the largest populations first.

-Is there anything, any topic that you would like to talk about but I didn’t ask you?

-No, as I mentioned, we like to be part of the cities and that means a lot of things, but above all it means, you know we have over 300 couriers active on the platform in Armenia already, that’s 300 people who are working on the platform, have access to income, many of our couriers have different access to normal labor jobs, this will go to thousands by next year, so they impact there. We have over 400 partners selling on the platform already, 90% of those are small businesses, so that’s also important. We work with local councils, with public administration, we are trying to be part of the ecosystem, we set up local companies, we have several local teams. So in essence, we try to be as much part of Armenia cities that we operate as possible, and it’s not just about a tech company, I think that’s key for us. We have courier safety training, which is super important. You know they are on motorbikes and bicycles, and I think that’s a very important part. So, we are just getting started. We have some good examples in neighboring countries where we have massive businesses. We launched in Georgia four years ago, and it’s ten times the size of the business. So Armenia is going to get a huge growth, and we see that the team’s amazing, the local team is executing outstanding, so I am really excited. I am here three days but I will be back very soon.