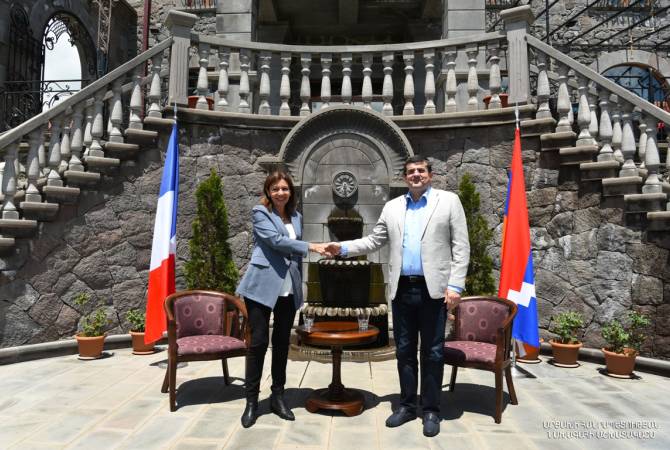 
YEREVAN, MAY 27, ARMENPRESS. On May 27, President of the Artsakh Republic Arayik Harutyunyan received the representative delegation led by Mayor of Paris Anne Hidalgo, ARMENPRESS was informed from the press service of Artsakh President’s Office.

During the tête-à-tête talk, the President expressed words of satisfaction to the Mayor of Paris for the initiative and courage, emphasizing that the Artsakh authorities highly appreciate the regular contacts with the French political circles.

Expressing gratitude for the warm reception, Anne Hidalgo noted that Paris is ready to exert the necessary efforts to support the people of Artsakh within the framework of humanitarian programs.

Thereafter, an extended meeting was held with the participation of representatives of the legislative and executive bodies of the Artsakh Republic, Ambassador of Armenia to France Hasmik Tolmajyan, members of the ARF Bureau, officials of the Coordinating Council of Armenian Organizations of France, Governor of Syunik Robert Ghukasyan and other officials. A wide range of humanitarian issues were on the discussion agenda.

The meeting was held in the town of Goris of Armenia’s Syunik Province.