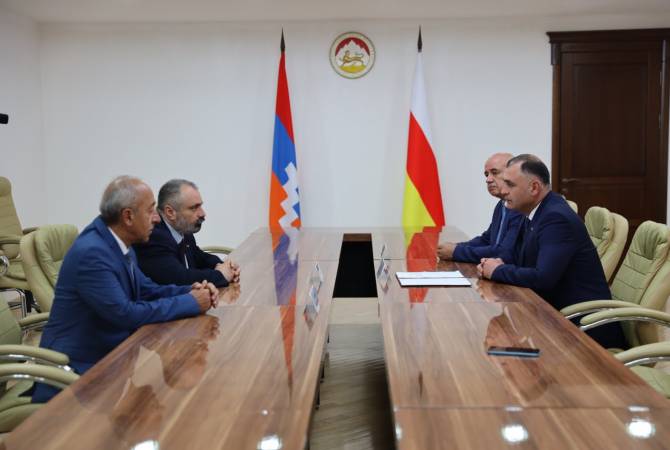 
YEREVAN, MAY 26, ARMENPRESS. (Press Release, Artsakh MFA) On May 23-25, Minister of Foreign Affairs of the Republic of Artsakh David Babayan paid a working visit to the Republic of South Ossetia to participate in the inauguration ceremony of the newly elected President of the Republic, Alan Gagloyev.

During the inauguration ceremony, the Foreign Minister of Artsakh read out the congratulatory address of the President of the Republic of Artsakh Arayik Harutyunian.

During the visit, Minister Babayan was received by newly elected President of South Ossetia Alan Gagloyev. The Minister had also a meeting with Acting Foreign Minister Dmitry Medoyev. A wide range of issues related to the Artsakh-South Ossetia relations and regional processes were discussed at the meetings. The sides noted the importance of consistent development and deepening of relations, expansion of cooperation between different state and public structures.

Within the framework of the visit, David Babayan delivered a lecture at the South Ossetian State University He briefed on the origin of the Azerbaijani-Karabagh conflict and the current realities, as well as touched upon the centuries-old Armenian-Ossetian ties. At the end of the lecture, the Foreign Minister answered the questions of the University’s lecturers and students.

During the visit, the Foreign Minister also met with representatives of the Armenian community of the Republic of South Ossetia. Minister Babayan noted the importance of strengthening the Homeland-Diaspora ties, as well as highly appreciated the special attitude of the South Ossetian authorities towards the Armenian community of the country, proudly stressing that the local Armenians manage not only to maintain their national identity and connection with the historical homeland, but also to be exemplary and patriotic citizens of South Ossetia.

Chief of Staff of the Foreign Ministry of the Republic of Artsakh Semyon Afiyan accompanied the Minister during the visit.