Armenian-Argentine relations are at a high level – Ambassador Mariano Vergara 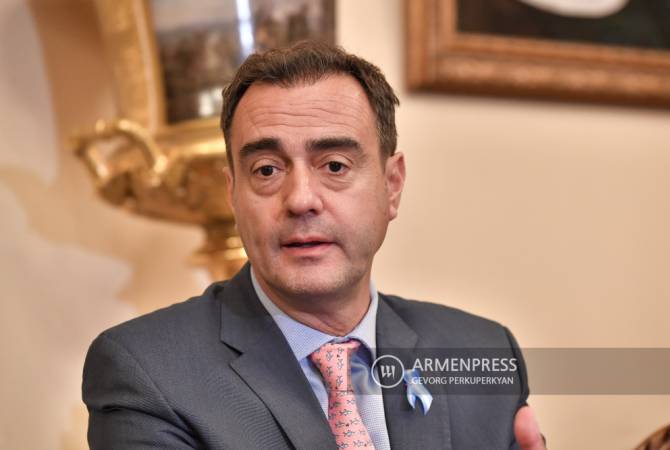 
YEREVAN, MAY 25, ARMENPRESS. Ambassador of Argentina to Armenia Mariano Vergara says the relations between the two countries are at a high level. According to him, a lot has been done over the course of years for the development of the Armenian-Argentine ties, but adds that still much needs to be done.

The Ambassador told reporters today that the fact that there is an Embassy of Argentina in Armenia is also conditioned by the large Armenian community in Argentina. He said this is also the reason why a concert will be held in Yerevan on May 27 on the occasion of the Argentine National Day, that is celebrated on May 25. “This is also a vivid manifestation of the Armenian-Argentine firm ties”, he added.

The Ambassador said he is impressed with Armenia, praising the high level of culture here and adding that music is loved and appreciated in Armenia.

“We have noticed that the music-lover Armenian society shows a special attitude to the Argentine tango, particularly, they like the works of Astor Piazzolla. It would be better if an Argentine bandoneonist came to Armenia, stayed here and gave concerts in the region and also played Argentine music. It would be much better if a school of Argentine tango opened in Armenia and there would be professional tango dancers here”, Mariano Vergara said.

He informed that they are planning another concert in Yerevan in October in cooperation with the State Chamber Orchestra of Armenia. The concert will be dedicated to the 30th anniversary of the establishment of diplomatic relations between Armenia and Argentina.

“We are going to implement quite rich cultural programs. There will be photo exhibitions, presentations of translations of literary works and other events”, he said.