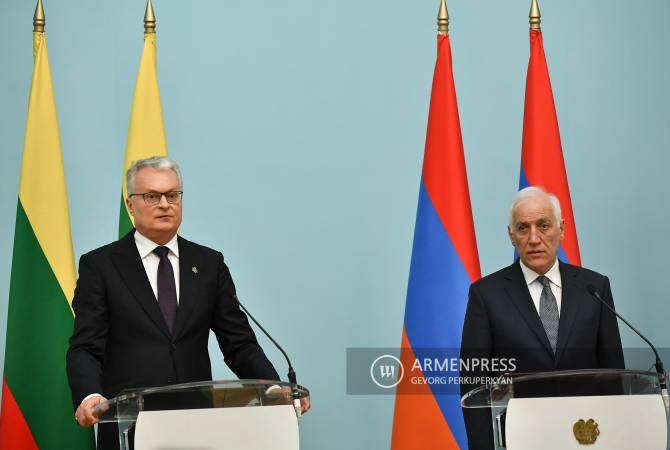 
YEREVAN, MAY 20, ARMENPRESS. Lithuania supports reaching an agreement between Armenia and Azerbaijan, President of Lithuania Gitanas Nausėda said during the joint press conference with Armenian President Vahagn Khachaturyan in Yerevan.

This is the first visit of the Lithuanian President to Armenia. He said he is very impressed by the hospitality. He reminded that Lithuania was the first country to recognize the independence of Armenia in 1991.

“Since then we have supported your efforts, as well as your transition to democratic values. Lithuania supports the Eastern Partnership programs. Lithuania supports Armenia’s integration to the European family”, he said, adding that they are presenting a broad framework in the Armenia-EU relations.

The Lithuanian President also welcomed the efforts of the Armenian government particularly in the justice system. “We want you to continue this path of democracy that will lead to your socio-economic development”, he said.

He said in the morning he had a chance to lay flowers at the Armenian Genocide Memorial. “This is something that should never happen again on this earth”, Gitanas Nausėda said.

Commenting on the situation in Ukraine, the Lithuanian President said freedom is highly important for the entire democratic world, adding that it is necessary to support Ukrainians with all means.

The President of Lithuania expressed confidence that his visit will contribute to the deepening of the relations between Armenia and Lithuania, and the peoples of the two countries. He said he sees a great potential in this regard. Gitanas Nausėda believes that it is possible to benefit in different areas of the bilateral relations, such as business, culture, education, etc.