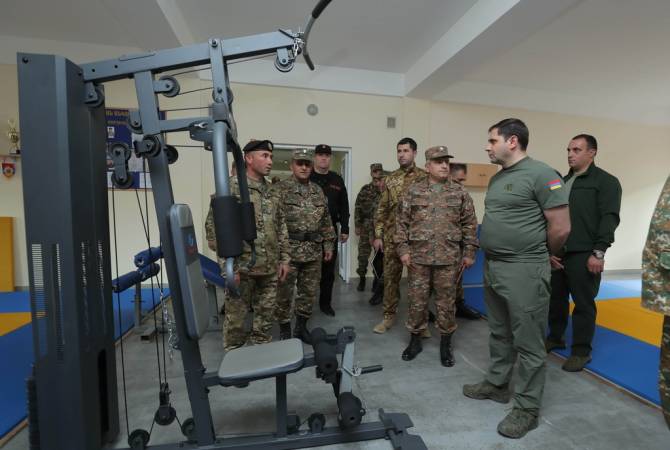 
YEREVAN, MAY 20, ARMENPRESS. Minister of Defense of Armenia Suren Papikyan visited on May 19 the 3rd Army Corps, the ministry said in a news release.

Minister Papikyan got acquainted with the technical capacity of the border observation points and then held a consultation with the commanding staff discussing the Army reforms.

Suren Papikyan honored the memory of the 44-day war victims at the memorial wall in the territory of the Corps.

The minister also visited the military units of the 3rd Army Corps, got acquainted with the service conditions and the ongoing renovation works.

The minister discussed issues relating to the upgrading of the Armed Forces with the commanders and servicemen of the units, assuring that the military-political leadership of Armenia will take all efforts to raise the attractiveness of the military service and strengthen the combat readiness of the Army.

Suren Papikyan also visited the Defense Ministry’s Military and Sports College named after Monte Melkonian and met with the students. He said that large-scale reforms aimed at raising the quality of the military education are expected soon, and also a housing package for servicemen is being prepared aimed at increasing the attractiveness of the officer service.

19:52, 06.24.2022
2411 views The Chinese Ambassador to Armenia attaches importance to cooperation with Shirak Province in various fields