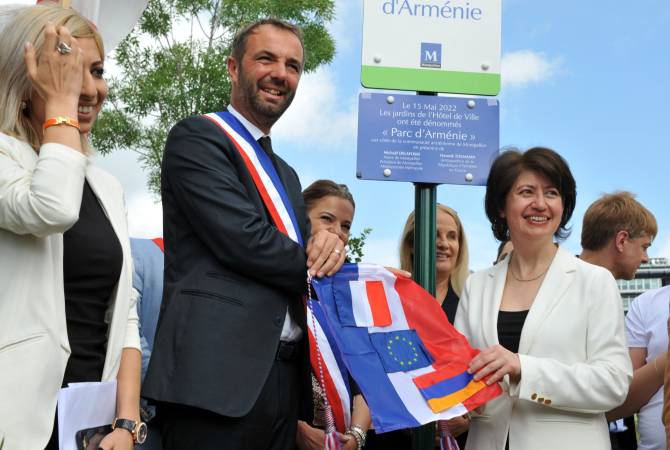 
YEREVAN, MAY 18, ARMENPRESS. The French city of Montpellier renamed a town park Armenia Park (Parc d'Armenie) in celebration of the Armenian-French friendship.

Montpellier Mayor Michaël Delafosse and the Armenian Ambassador to France Hasmik Tolmajian inaugurated the park near the Montpellier City Hall.

Ambassador Tolmajian praised the initiative and described it as an homage to the strong friendship between Armenia and Montpellier, which began from the Middle Ages when active contacts were established between the Armenian Kingdom of Cilicia and the historic French province of Languedoc. In this context the ambassador also mentioned the solemn reception of the Armenian King Levon V in Montpellier.

In her remarks the ambassador also thanked the Montpellier Mayor and the City Council for the adoption of a resolution recognizing the independence of the Republic of Artsakh after the 2020 war, for the protection of the people of Artsakh and their rights.

She also noted the active work of the Armenian community of Montpellier.

The Ambassador underscored the important contribution of Professor Gérard Dédéyan of the Paul Valéry University, Montpellier III in strengthening cooperation between Armenia and the city of Montpellier in the past decades.