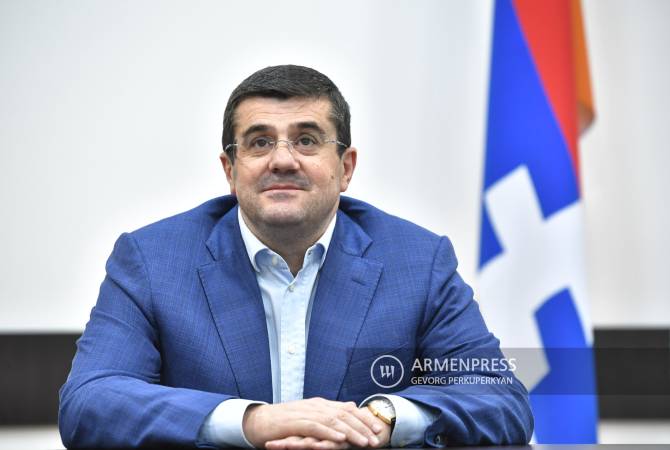 “Dear Compatriots, Dear Veterans of the Great Patriotic War and Artsakh Liberation War, Distinguished Generals, Officers, Soldiers of the Defense Army, May 9 has entered the history of the Armenian people as a symbol of its freedom-loving and indomitable spirit, courage and heroism, boundless love for the Motherland, devotion and self-sacrifice.

During the Great Patriotic War, our grandfathers, along with other peoples of the Soviet Union, fought selflessly against the greatest evil against humanity, fascism. We are proud that Artsakh also had a significant contribution to the Victory, every third of its population went to the front, giving birth to many USSR heroes, marshals, admirals, commanders.

Their heroic traditions were continued by future generations, 30 years ago forming a regular army from volunteer groups, successfully carrying out the military operation of Shushi, liberating the ancient Armenian fortress city.

But today Shushi is again in captivity, like hundreds of our sanctuaries and settlements, which are being destroyed and vandalized by Azerbaijan. Their goal is to completely eliminate the Armenian trace and the Armenians, violating all the norms and principles of international law.

Today the security of Artsakh is provided by the Russian peacekeeping troops together with our Defense Army. We are deeply grateful to our friends for standing by the people of Artsakh and supporting us in every way.

On behalf of the authorities of the Artsakh Republic and on my personal behalf, I cordially congratulate everyone on these precious and solemn holidays, and pay homage to the memory of all our martyrs who sacrificed their lives for the defense of the Motherland, their families and relatives. For the sake of the sacred memory of our heroic grandfathers, fathers and sons, for the sake of future generations, Artsakh must always be Armenian and impregnable.

Eternal glory and honor to the devotees of the homeland."