Human stories will bring down walls of hate: What changed in the life of Fethiye Cetin after discovering Armenian roots? | ARMENPRESS Armenian News Agency

Human stories will bring down walls of hate: What changed in the life of Fethiye Cetin after discovering Armenian roots? 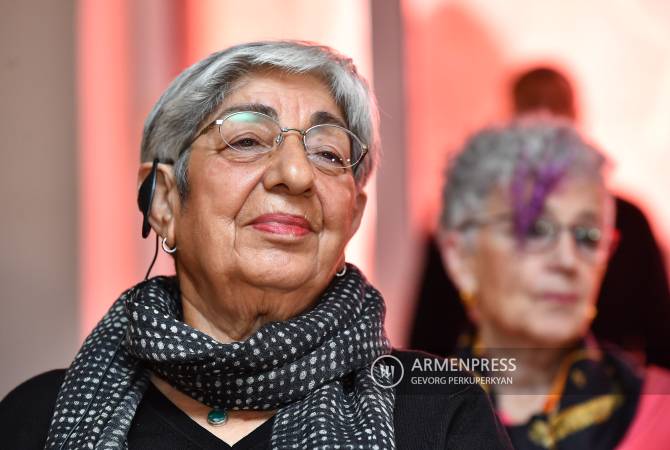 
YEREVAN, MAY 6, ARMENPRESS. Turkish lawyer, writer and human rights activist Fethiye Cetin has arrived in Armenia to participate in the Hrant Dink: Here and Now exhibition in Yerevan.

Growing up in the small town of Maden in Turkey, Fethiye Cetin knew her maternal grandmother as a Muslim housewife called Seher. Only decades later did she discover the truth. Her maternal grandmother was Armenian, and her real name was Hranush Gadaryan. Hranush was taken from her mother’s arms during a death march over the course of the Armenian Genocide.

Cetin revealed her story in her 2004 memoir titled My Grandmother: A Memoir.

ARMENPRESS – Mrs. Cetin, how did your life change after you discovered your grandmother’s story and revealed that you have Armenian roots?

Fethiye Cetin – When my grandmother told me her story, I was studying law at the university. Before that, we didn’t have much information about the tragedies of 1915. When I learned the story of my grandmother I was shocked. The first thing I wanted to do was to run out into the street and scream ‘you lied to us, the state lied to us’. I felt great pain and anger, but I made my struggle stricter. I thought that through our struggle we would change the way of thinking of the Turkish government, but it didn’t happen. During the turbulent times of the 80s when the coup took place I postponed writing the book about my grandmother’s story. But I am glad that it happened that way because years later I began writing my story in a more mature way, which affected many people. Then I saw that there are many families who have similar stories, they were simply not talking about it or talking very quietly. My book had great impact and it spread widely.

5 days before Hrant Dink was assassinated, he called me and said that the book about my grandmother’s story has been very well accepted in Armenia and offered me to travel with him to Yerevan. I was very touched, I was on my way to Paris, I promised to come to Armenia as soon as I returned. I was excited that I had to visit Yerevan with Hrant, but my excitement didn’t last long. He was killed when I was in Paris. I’ve visited Armenia many times since then, but without Hrant, but we can say that I brought Hrant with me with this exhibition. He is with us with his words and struggle.

ARMENPRESS: In what matters did you revise your approaches after finding out your family story? How did it impact your activities?

Cetin: After finding out the story of my grandmother I became very doubtful on everything. I didn’t believe whatever we were being taught. I had lost my faith, I was trying to make clarifications and find out more. It seems like before that I was blind, and then I started to see, to look around me, ask questions. I remember that in my hometown, when the grown-ups would show us a church they would never tell us whose church it was, where the people disappeared to, and we wouldn’t ask. We would see elderly Armenian men and women all alone, and we wouldn’t ask how they were left all alone. I began to look around me through different eyes and ask questions after learning about my grandmother’s story. My grandmother’s story impacted my career. It made me take up the protection of rights of national minorities. A platform was launched and that’s when I met Hrant Dink.

ARMENPRESS - You mentioned that after you wrote your book you found out that there are other similar stories in Turkey as well but many have remained quite. How did you find them?

Cetin: I remember when the book was published the entire first print run was sold out. I couldn’t even work during the first few days. I was getting phone calls and letters all the time. I received so many calls and letters during those days, and some people were calling to tell the stories of their Armenian grandparents. My grandmother’s story received widespread attention and other families began to speak out.

ARMENPRESS: With your story, you shed light on the history of the Armenian Genocide, you were fighting for justice together with Hrant Dink. How was your activity perceived in Turkey? What difficulties did you encounter?

Cetin: The book was published in 2004, I was already a lawyer then. I was thinking whether it could impact my law practice. For example, if a judge had an extreme way of thinking and were deniers of the Armenian Genocide they could look at my cases differently and discriminate against me. I had such concerns.

More copies were published, my speeches started to be broadcast on television, I was giving many interviews. I became widely known in Turkey. One day, during judicial proceedings, a judge of another case saw me and praised me for my book. The judge even told me that he’d bought a few copies and gave them to friends. Then, during the trial of my case, the presiding judge was whispering that his grandmother was also Armenian. I can bring many similar examples. I can say that I haven’t heard anything else regarding this book, I didn’t receive any threats. Only one time, in a school, I was told why I haven’t told the stories about Turkish, Muslim grandmothers. I answered that whatever I wrote in the book was my story and advised them to write their own stories. I believe that human stories like this will bring down the walls of hate.

ARMENPRESS: You think that regularly presenting the human stories of Armenian Genocide generations and speaking about this will eventually lead to Turkey’s society accepting the truth?

Cetin: I haven’t lost hope at all. Now it seems like there is a step back in Turkey. Several years ago on April 24th the leadership expressed condolences, but this year they changed the emphasis and made a step back. Chauvinistic positions increased rapidly in Turkey, although this is related with the upcoming elections. The power and the press are concentrated in the hands of the government. It has major influence in social media and now the nationalist voice has become more prevalent. The voice of those who ask questions and criticize is not heard in the atmosphere of fear and threat that the government created in Turkey.

ARMENPRESS: What do you say when people ask you about your nationality. What do you feel yourself to be?

Cetin: I have Armenian, Turkish and Kurdish roots. That’s what I answer, but whenever I see an attack on any side that given nationality in me becomes more highlighted.

ARMENPRESS: Did you try to study Armenian language?

Cetin: I regret that I couldn’t find the time to learn the language but I know some words. I think I am still young and will manage to learn it.