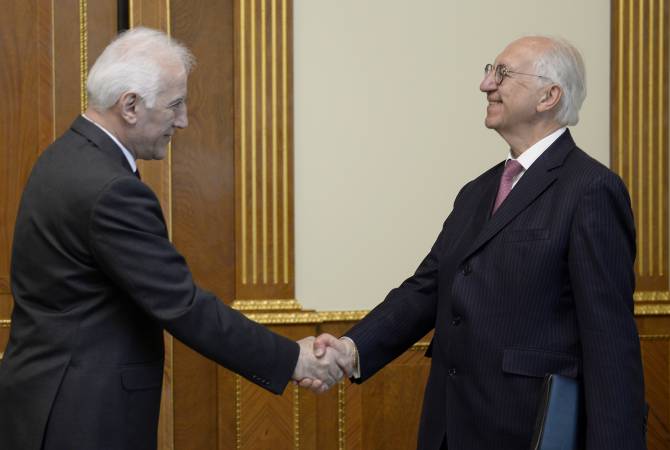 As ARMENPRESS was informed from the press service of the MFA Armenia, Ministers Mirzoyan and Jaishankar expressed satisfaction with the high level of political dialogue between the two countries. Ararat Mirzoyan stressed that strengthening relations with India is one of the priorities of Armenia's foreign policy.

The interlocutors discussed the process of implementation of the agreements reached during the Indian Foreign Minister's visit to Armenia in the fall of 2021. The prospects for further development of relations in the fields of information technologies, aviation, education, culture, tourism and other spheres were touched upon. The parties stressed the effectiveness of the work done in recent months, expressed mutual readiness to continue the deepening of cooperation.

Ararat Mirzoyan stressed that he is visiting India accompanied by representatives of Armenian business and investment circles, whose meetings with their Indian partners will be an additional impetus for the activation of Armenian-Indian trade and economic cooperation, which has a great potential.

Prospects for deepening cooperation in the field of transport communications were touched upon.

Issues related to regional and international security and stability were also discussed.

The Armenian side presented the situation in the South Caucasus region and Armenia's position on the processes aimed at establishing regional peace and stability, and on negotiations on a comprehensive peace treaty with Azerbaijan. Minister Mirzoyan expressed satisfaction with India's position on the settlement of the Nagorno Karabakh conflict. The mediating role of the OSCE Minsk Group Co-Chairs in pushing forward the peace process was emphasized.

Minister Mirzoyan also briefed his interlocutor on the developments in the process of normalization of relations between Armenia and Turkey.

During the meeting, the Armenian Foreign Minister reaffirmed Armenia's support for India in the issues of Jammu and Kashmir.