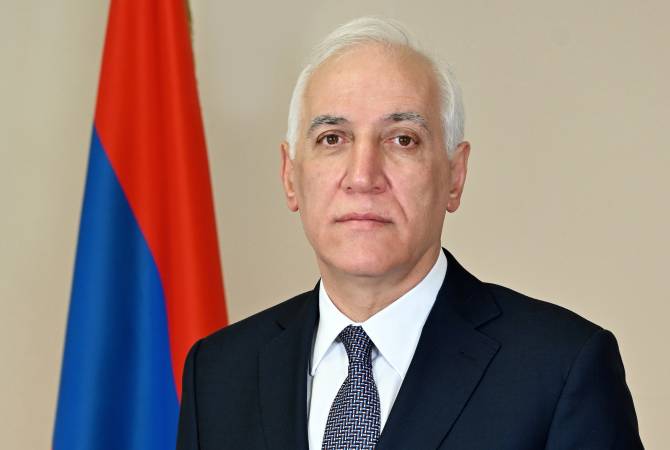 
YEREVAN, APRIL 24, ARMENPRESS. President of Armenia Vahagn Khachaturyan released a statement on the 107th anniversary of the Armenian Genocide.

“Today, the Armenian people and their friends, all progressive humanity, commemorate the victims of the Armenian Genocide.

Taking advantage of the turmoil of World War I, and the great powers' connivance, the Young Turk leaders of the Ottoman Empire planned, and carried out the most brutal massacres and annihilation of the Armenian population early in the 20th century. More than one and a half million Armenians fell victim to this tragedy, hundreds of thousands of Armenians were forced to leave their homeland; banished and deprived of their homeland and property, they took the road of migration. Surviving death, and losing relatives, our compatriots scattered around the world, found their new refuge on foreign shores, and in various host countries.

Manifesting an unbreakable will to live and create, they started families, built schools and churches, established communities, patriotic unions, and diverse organizations. The Diaspora Armenians enriched the social, business, and cultural palette of the countries where they lived, showing the Armenian talent and exceptional abilities, and bringing glory and honour to our people.

Today, several dozen states and authoritative international organizations have recognized, and condemned the Armenian Genocide. We are convinced that if people had condemned the Armenian Genocide in time, it would have prevented further genocides. That is why the Republic of Armenia consistently struggles in the international arena to condemn and prevent the crime of genocide. Through Armenia's efforts, December 9 is the International Day for the Commemoration and Dignity of the Victims of the Crime of Genocide, and the Prevention of this Crime. Historical memory, continuing education, and dissemination of accurate information about what happened are important to prevent a recurrence of genocides.

We realize that the best way of paying tribute to the memory of our martyred compatriots is to establish a strong, democratic Armenia, ensure the well-being of our people, secure the borders of our country, and reinforce Armenia's international prestige,” Khachaturyan said in the statement released by his office.