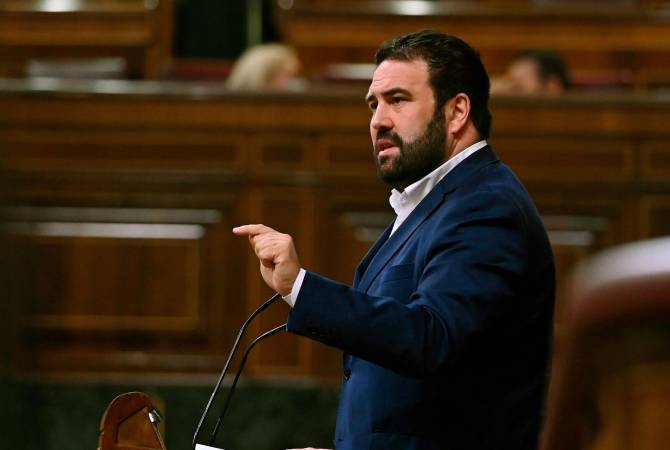 
YEREVAN, APRIL 24, ARMENPRESS. Member of the Congress of Deputies (lower house of parliament) of Spain Jon Iñarritu says he believes that the reason behind Spain not having officially recognized the Armenian Genocide yet is the pressure exerted by Turkey.

In an exclusive interview to ARMENPRESS, the legislator expressed hope that the situation will change soon.

Iñarritu: Firstly, I have to say that in Spain there are several parliaments such as the Basque Parliament or the Catalan Parliament that have already recognized the Armenian Genocide. Unfortunately, the Spanish Congress has not done until now. Secondly, I am hopeful that soon this can change and the Spanish Parliament recognizes the first genocide of the 20th century.

I believe that the reasons why Spain and other some States have not recognized it to this day, is the pressure exerted by Turkey, but if historically the facts are evident, it makes no sense that this is not recognized by his name: genocide.

ARMENPRESS: More than a century after the Genocide Turkey still continues its policy of denial. How would you assess the behavior of Ankara to avoid the historical truth?

Iñarritu: The facts of denial and historical relativism in relation to the Armenian Genocide I think are very unfair and humiliating to the Armenian people and other minorities such as Assyrians or Pontic Greeks, but in the same way I think they do not benefit the Turkish society.

ARMENPRESS: A process has started aimed to normalize the relation between Armenia and Turkey. In your opinion, can the process succeed if one of the parties refuses to accept the historical truth and admit the crime of genocide committed by his ancestors?

Iñarritu: Hardly, I know Turkey and I lived a short period of my life in Turkey and it is a fascinating State, but I think that acknowledging of the historical facts in relation to Armenians would help to consolidate a better relationship with Armenia, and at the same time, it would be an act of historical justice.

I think that Turkey should follow the example of Germany to deal with dramatic events in its own history. That would not weaken Turkey, it would make Turkey more dignified and stronger.

ARMENPRESS: Impunity emboldens the perpetrators of the crimes. We recently witnessed it in Artsakh, where the Azerbaijani military tortured, killed and mutilated unarmed captive Armenian soldiers and civilians. Don’t you think there’s a lack of proper reaction from the international community?

Iñarritu: The war crimes committed in Artsakh by the Aliyev´s Regime and its allies are evident. I myself witnessed what was happening. The responsibles for these acts should be brought to the International Justice. The best way to prevent similar events, I believe, would be that the international community  recognize that Artsakh is a clear Remedial Secession case. That would prevent new crimes, allow the Armenians of Artsakh to live in peace in their ancestral land, and to improve relationships  between the South Caucasus peoples and States.

Finally, I want to express my solidarity and support for the Armenian people on the day of commemoration of the Genocide.