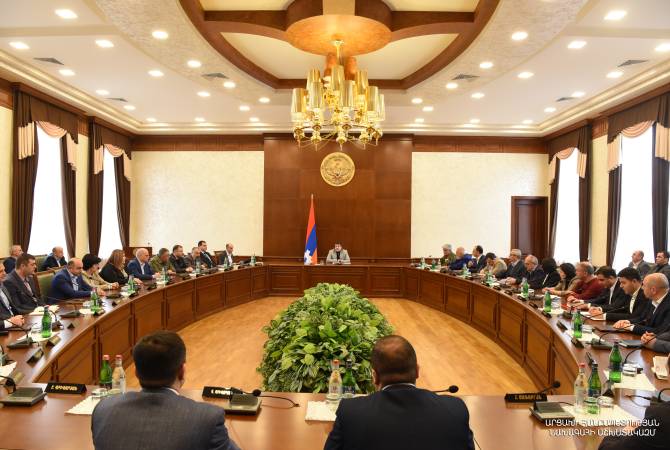 
YEREVAN, APRIL 9, ARMENPRESS. President of the Republic of Artsakh Arayik Harutyunyan chaired an extended-format session of the government today, his Office said.

Firstly, the President presented the latest military-political developments of the Republic and then outlined the main actions to be taken in the public administration system in accordance with the logic of the current situation.

“We support stable and lasting peace, but we can not bargain our people’s demand by refusing from the right to self-determination”, the President of Artsakh said, adding that given the new geopolitical realities, a number of changes will be made to the agenda of the government based on necessity.

He said that discussions will soon start with political forces on forming a common political agenda which first of all will be based on the risks expected from the external security challenges facing Artsakh.

“The talk is not about forming a coalition government. But we all understand that we need a firm internal unity. Therefore, my call is to all members of the Cabinet, all circles of the public to stand by each other in order to successfully overcome the problems facing our state and people”, he said.

The President also said that the government is going through strict savings of financial resources, but added that this doesn’t mean that the approved programs won’t be implemented.

During the meeting the President of Artsakh gave a number of instructions to the responsible officials over the issues discussed.

16:31, 06.30.2022
2086 views Statements of Turkish officials that they coordinate the process with Azerbaijan are strange – Armenia’s Special Envoy