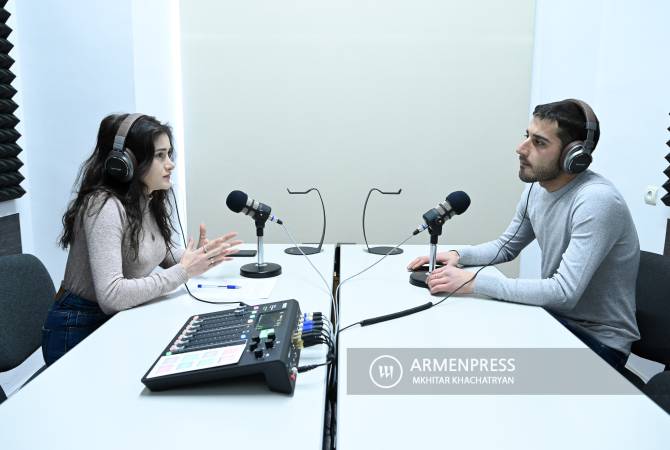 Albert Hovakimyan, the winner of the 100 Ideas for Armenia project, is calling his innovation the Dragon Reaper (Vishapakagh).

It is an automated optical detection active anti-air defense system, he explains.

According to Hovakimyan, the Dragon Reaper is needed today because there are virtually no alternatives which would reliably and effectively protect from loitering munitions, particularly the Israeli-made Harops which are in the Azeri military’s arsenal. Hovakimyan says the development of these loitering munitions, aka kamikaze drones, is leading to a situation where the size of the drones are getting smaller, while the number of the strike groups is increasing, and the software is shifting to artificial intelligence.

“This project is a solution requiring minimal industrial resources using modern, accessible digital technologies and tools, it has a modular structure in principle, which are connected to each other with a local network and can be used with different modular combinations and options. It is the connecting, combining and deployment of already existing measures, some of them in production in Armenia, with the use of modern solutions and software, which will together be the active air defense system, while minimal energy and human resources will be needed for its operation. It is unique in the sense that the principles of existing radio-detecting guiding and radio-electronic suppression methods will be used with optical solutions,” Hovakimyan said, adding that the system won’t require a direct permanent maintenance, and it will work under the “deploy and forget” principle.

Hovakimyan says his system can potentially replace the manned air monitoring positions and thus save lives during possible threats.

“The project is still in phase 1 research. Having skills and knowledge in air defense and programming, I can certainly say that a little team work from the rather developed IT sector specialists of Armenia can lead to very big results,” he added.

The 100 Ideas for Armenia competition is a youth project organized by the Ministry of Education, Science, Culture and Sport for encouraging young people to be interested in science and propose innovations. The competition has more than 20 categories and includes various sectors.