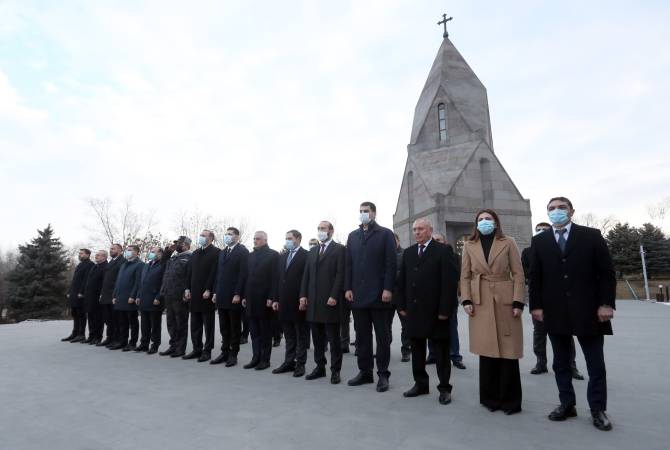 
YEREVAN, JANUARY 28, ARMENPRESS. The high-ranking officials of Armenia visited today the Yerablur Military Pantheon on the 30th anniversary of the foundation of the Armenian Army to pay tribute to the memory of all heroes fallen for the defense of the Homeland.

Deputy Prime Ministers Mher Grigoryan and Hambardzum Matevosyan, Minister of Defense Suren Papikyan, Secretary of the Security Council Armen Grigoryan, Foreign Minister Ararat Mirzoyan and other officials laid a wreath at the monument honoring the memory of heroes, as well as flowers at the tombs of soldiers.

Catholicos of All Armenians Garegin II, Speaker of Parliament Alen Simonyan, Vice Speakers and a number of lawmakers also honored the memory of heroes at the Military Pantheon.

16:31, 06.30.2022
2053 views Statements of Turkish officials that they coordinate the process with Azerbaijan are strange – Armenia’s Special Envoy