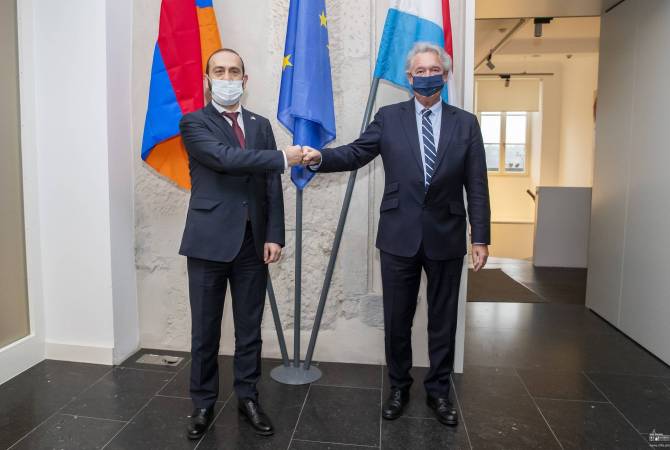 As ARMENPRESS was informed from the press service of the MFA Armenia, the Foreign Ministers of the two countries praised the cooperation in the fields of democracy, rule of law, protection of human rights, as well as the fight against corruption. Ararat Mirzoyan and Jean Asselborn expressed readiness to intensify the political dialogue between the two countries.

It was emphasized that on the eve of the 30th anniversary of the establishment of diplomatic relations between Armenia and Luxembourg, the first official visit of the Armenian Foreign Minister in the history of bilateral cooperation will serve as a new impetus for the realization of the still untapped potential for cooperation.

The sides exchanged views on deepening the Armenia-EU partnership, emphasizing in this context the effective implementation of the Armenia-EU Comprehensive and Enhanced Partnership Agreement.

The interlocutors highlighted the cooperation between the parliaments of the two countries, in particular, through the Armenia - Luxembourg friendship groups.

The Ministers noted with satisfaction the experience of effective cooperation within the framework of international organizations, including the Council of Europe, the OSCE, and the United Nations, expressing mutual readiness to make efforts to strengthen close cooperation at the multilateral level.

The Foreign Ministers of Armenia and Luxembourg discussed regional and international security issues. The sides exchanged views on the solution of humanitarian problems created by the aggression unleashed by Azerbaijan against the people of Artsakh. Minister Mirzoyan thanked for Luxembourg's clear position from the very first days of the 44-day war, including the adoption of the resolution condemning the hostilities unleashed by Azerbaijan against Artsakh by the parliament of Luxembourg. The sides emphasized the need for a comprehensive and lasting settlement of NK conflict under the mandate of the OSCE Minsk Group Co-chairs’ format.

During the meeting, reference was made to the process of normalization of relations between Armenia and Turkey without preconditions. The importance of establishing cooperation between the countries of the region and creating preconditions for sustainable development was emphasized.