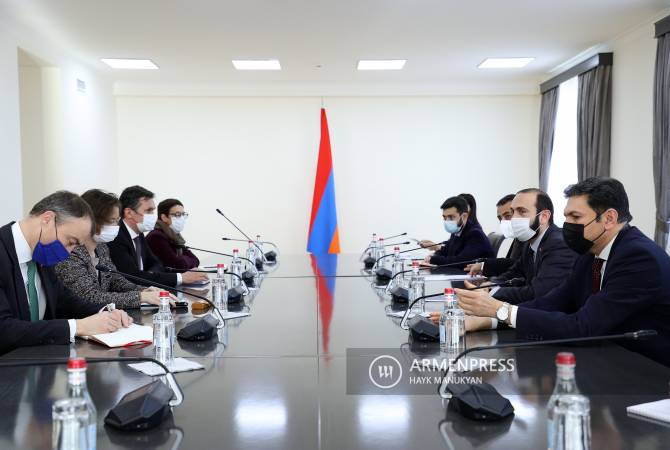 
YEREVAN, JANUARY 21, ARMENPRESS. Foreign Minister of Armenia Ararat Mirzoyan received today the delegation of the European Union’s Special Representative for the South Caucasus and the crisis in Georgia Toivo Klaar and representative of the French presidency at the Council of the EU Isabelle Dumont, the foreign ministry reports.

FM Mirzoyan congratulated France on assuming the presidency of the Council of the EU, expressing confidence that it will be effective and will contribute to the establishment of security and stability in the South Caucasus. The further development of the Armenia-EU partnership was also emphasized.

The meeting also touched upon the humanitarian problems caused by the 2020 Nagorno Karabakh War. In this context the immediate repatriation of Armenian prisoners of war and civilian captives, held in Azerbaijan, was emphasized.

The sides discussed also taking actions to raise the level of security and stability on the Armenian-Azerbaijani border. In this respect the minister highlighted the implementation of the agreements reached by the Sochi trilateral statement and the Brussels meeting mediated by the President of the European Council. The necessity of observing the ceasefire, refusing the militaristic rhetoric by the top leadership of Azerbaijan was stressed.

The Armenian FM attached importance to the full resumption of negotiations for the lasting and comprehensive settlement of the Nagorno Karabakh conflict under the mandate of the OSCE Minsk Group Co-Chairmanship.

11:29, 05.19.2022
2646 views U.S. recognizes role of population of Nagorno-Karabakh in deciding its future–Ambassador Tracy’s interview to ARMENPRESS