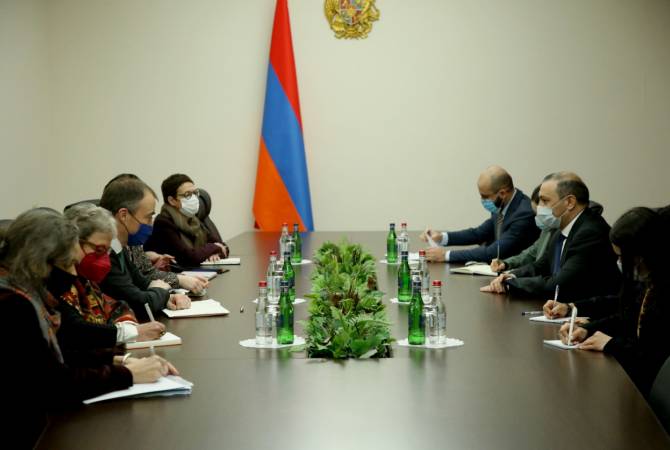 
YEREVAN, JANUARY 21, ARMENPRESS. Secretary of the Security Council of Armenia Armen Grigoryan met today with the delegation consisting of representatives of the European Council’s presidency and the European Union, his Office reports.

The delegation included EU’s Special Representative for the South Caucasus and the crisis in Georgia Toivo Klaar, Head of the EU Delegation to Armenia Andrea Wiktorin, French Ambassador to Armenia Anne Louyot, Advisor for Continental Europe and Turkey at the Office of the French President Isabelle Dumont and others.

The sides praised the Armenia-EU active cooperation during their conversation. The Secretary of the Security Council highlighted Armenia’s readiness to continue the partnership with the European Union in the processes of preserving Armenia’s democratization and the region’s security.

At the meeting the sides also touched upon the current situation around the Armenian-Azerbaijani border. In this context the quick launch of the border delimitation and demarcation process and the creation of a respective environment for that were emphasized.

Isabelle Dumont and Toivo Klaar touched upon the humanitarian problems and stated that the EU is working actively to quickly solve the crisis around the prisoners of war.