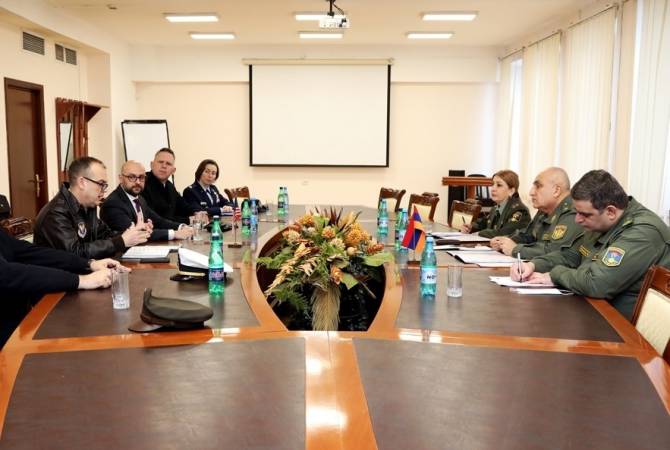 As ARMENPRESS was informed from the press service of MoD Armenia, Deputy Defense Minister Arman Sargsyan received the delegation. The meeting was also attended by US Ambassador Extraordinary and Plenipotentiary to Armenia Lynne Tracey. The interlocutors discussed issues related to regional security, Armenian-American bilateral cooperation in the field of defense. The parties expressed readiness to continue the development of cooperation within the framework of existing programs, to initiate new directions of cooperation in areas of mutual interest.

Deputy Chief of the General Staff of the Armed Forces of Armenia, Major General Arakel Martikyan also received the delegation. During the discussions on the Armenian-American military cooperation, Major General Martikyan highlighted the cooperation in the fields of peacekeeping, military medicine and education, and suggested making new efforts to develop that cooperation. The American side made a number of proposals, including rehabilitation programs for wounded soldiers and the development of emergency response systems.

During the visit, the delegation led by Brigadier General Edward Vaughan visited the peacekeeping brigade of the Armenian Ministry of Defense, took part in the welcoming ceremony of the Armenian peacekeepers who had recently returned from Kosovo. The delegation visited the National Defense Research University of the Ministry of Defense of the Republic of Armenia, as well as the Central Clinical Military Hospital of the Ministry of Defense, where the ceremony of handing over the technical equipment of the field hospital acquired with the support of the USA took place.

11:29, 05.19.2022
2545 views U.S. recognizes role of population of Nagorno-Karabakh in deciding its future–Ambassador Tracy’s interview to ARMENPRESS