Aliyev’s approach is one thing, reality is something else – Armenian FM on Azeri leader’s latest statement on OSCE MG | ARMENPRESS Armenian News Agency

Aliyev’s approach is one thing, reality is something else – Armenian FM on Azeri leader’s latest statement on OSCE MG 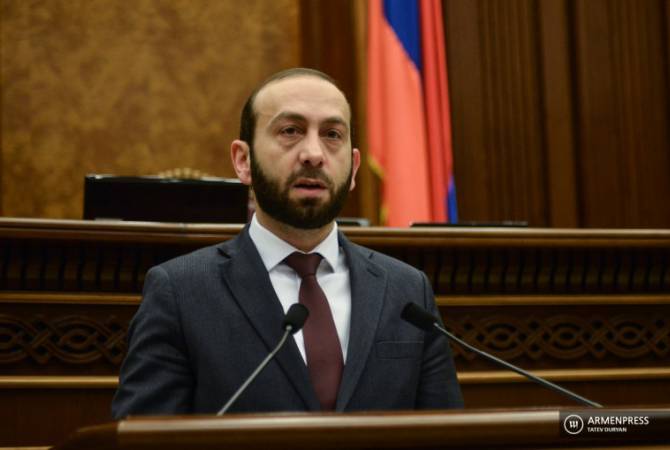 
YEREVAN, JANUARY 19, ARMENPRESS. Despite Azerbaijan’s attempts to misrepresent the Nagorno Karabakh conflict as being resolved, the world doesn’t agree with his narrative at all, Armenian Minister of Foreign Affairs Ararat Mirzoyan said at parliamentary question time when asked by MP Sargis Khandanyan.

Khandanyan asked the FM to comment on Azeri leader Ilham Aliyev’s latest interview where he’d claimed that he wants to pressure the OSCE Minsk Group’s attempts to work for a resolution of the NK conflict, because the conflict is over.

“This isn’t the first time when the Azerbaijani highest leadership is making destructive statements and positions, to say the least, which certainly hinders the discussion of all existing issues in a more constructive atmosphere and therefore the search and stipulation of good, normal solutions acceptable for everyone. Nevertheless, not always do public statements entirely or partially match with approaches discussed behind closed doors. Azerbaijan’s stance is one thing, reality is something else, the international community’s stance is something else. While the reality is, that, despite Azerbaijan’s position and attempts over the past year to misrepresent the NK conflict as being solved and that there is neither a conflict nor a NK, we’ve seen during this one year that the world doesn’t agree with this whatsoever, and reality isn’t like that either,” the Armenian FM said.

As proof for what he said, the FM referred to the positions made by numerous countries during the 2021 December Stockholm OSCE ministerial, who said that the NK conflict is unresolved and called for a resolution under the OSCE Minsk Group Co-Chairmanship format. “This is the only format vested with internationally recognized mandate to find a peaceful resolution to the NK conflict,” the FM said.