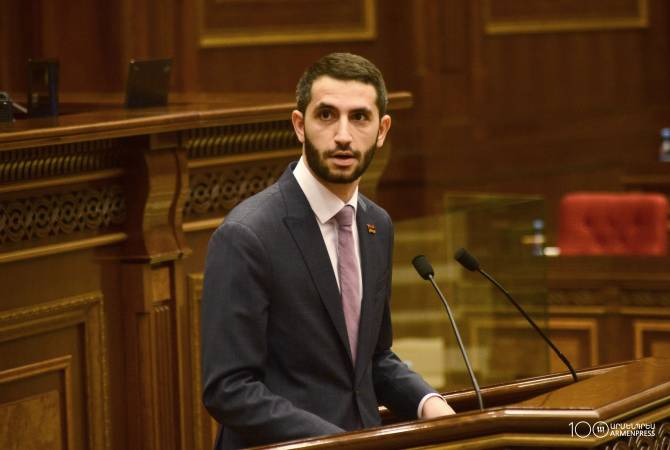 
YEREVAN, JANUARY 17, ARMENPRESS. The Vice Speaker of Parliament and Special Representative of Armenia for Dialogue with Turkey Ruben Rubinyan is angry over statements coming from opposition MPs who claim that the processes between Armenia and Turkey are taking place secretly.

Speaking in parliament, Rubinyan said that this is actually the first time that a process of normalization is being launched between Armenia and Turkey and the first point of this process is public.

Rubinyan said all events taking place within the framework of the process have been made public by the foreign ministry.

“When you say that secret processes are taking place, this is what angers me the most, because dear colleagues, negotiations with Turkey have taken place in the history of the Republic of Armenia during the tenures of all presidents, moreover in various formats. What do you think, how much was secret and how much was open during that time? Most was secret. For example, the same football diplomacy, the public part of which was launched during the presidency of Serzh Sargsyan. Do you think the non-public part of the process was launched during the presidency of Serzh Sargsyan? No, it started during Robert Kocharyan’s presidency. I am asking, did secret processes take place between Armenia and Turkey and why weren’t the secret negotiations publicized during Robert Kocharyan’s presidency, because what you are doing now, I apologize, seems to be hypocrisy. This process is the only case when a normalization process of the Armenia-Turkey relations is starting and the first point of it is being made public,” Rubinyan said.

“In our case a special representative is not a formal position, it is a function. Meaning, I wasn’t appointed to any position, I continue being Vice Speaker of Parliament just like before, but I also carry out the function of special representative which I’ve been delegated with publicly, including by the formal statement of the foreign ministry.”

11:29, 05.19.2022
2632 views U.S. recognizes role of population of Nagorno-Karabakh in deciding its future–Ambassador Tracy’s interview to ARMENPRESS