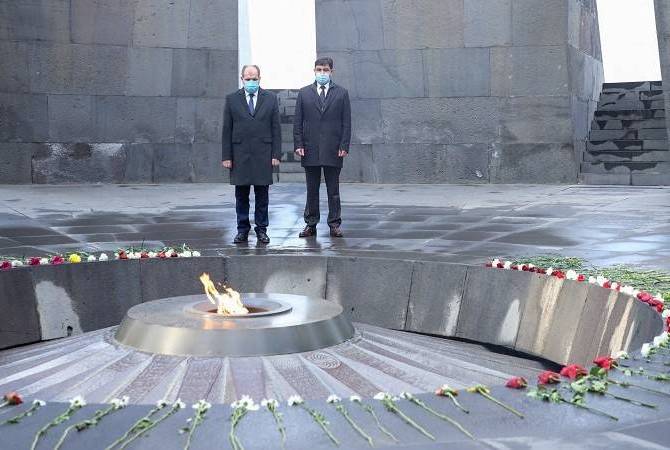 
YEREVAN, DECEMBER 9, ARMENPRESS. On the occasion of the International Day of Commemoration of and Dignity of the Victims of the Crime of Genocide, Deputy Foreign Minister of Armenia Armen Ghevondyan, ministry’s secretary general Boris Sahakyan and other representatives visited today the Tsitsernakaberd Memorial to pay tribute to the memory of the innocent victims of the Armenian Genocide, the Holocaust and the Assyrian, Yazidi genocides, the ministry reports.

9 December 2021 marks the International Day of Commemoration and Dignity of the Victims of the Crime of Genocide and of the Prevention of this Crime, as well as the 73rd anniversary of the 1948 Convention on the Prevention and Punishment of the Crime of Genocide (the “Genocide Convention”), the first human rights treaty adopted by the General Assembly. The Convention signifies the international community’s commitment to “never again” and provides the first international legal definition of “genocide,” widely adopted at national and international levels. It also establishes a duty for State Parties to prevent and punish the crime of genocide.