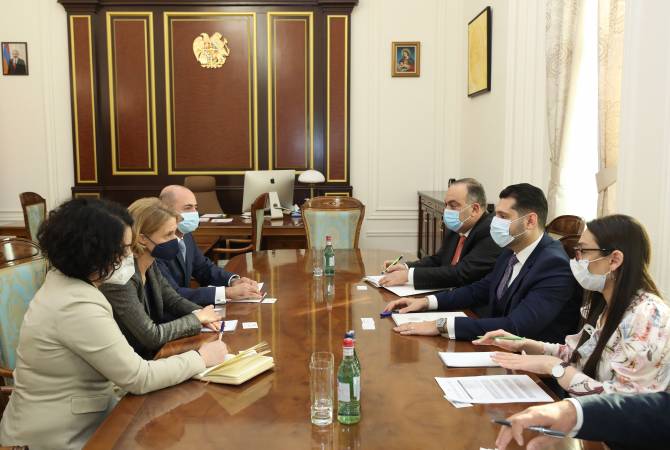 
YEREVAN, DECEMBER 8, ARMENPRESS. Deputy Prime Minister of Armenia Hambardzum Matevosyan met with World Bank (WB) Country Manager for Armenia Carolin Geginat on December 8. As ARMENPRESS was informed from the Office of the Deputy PM, welcoming the guest, Matevosyan praised the cooperation between the Government of Armenia and the World Bank. Hambardzum Matevosyan expressed readiness to closely cooperate for the successful implementation of the ongoing programs and the initiation of new ones.

The head of the WB Armenia Office Carolin Geginat congratulated Hambardzum Matevosyan on his appointment as the Deputy Prime Minister of the Republic of Armenia and wished him success in his new position. She reaffirmed the WB's readiness to cooperate with the Armenian Government and to expand that cooperation.

The interlocutors referred to the implementation of the 3rd Public Sector Modernization Project and the preparation works of 4th project. Within the framework of the 3rd project, great progress has been registered in the field of electronic systems: integrated security system for all e-administration platforms, digital signature and identification systems, unified citizen feedback portal, etc. The fourth project envisages expansion of state services, bringing the number of digital services to 350-400, modernization of tax administration systems, digitalization of services provided by local self-government bodies, road user awareness system, introduction of cyber security and related institutional mechanisms, establishment of a unified state data center, etc. Stressing the important role of the World Bank in the modernization of the public administration system in Armenia, the Deputy Prime Minister noted the need for close cooperation on social programs, development of community capacities and the existing infrastructure.

During the meeting, the cooperation between the Government of the Republic of Armenia and the WB, the ongoing programs in various spheres, including infrastructure development, water use, energy, balanced development of communities, etc. were discussed.