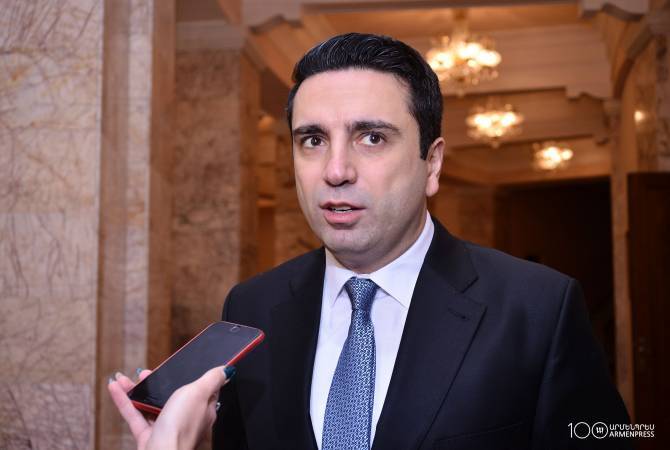 
YEREVAN, DECEMBER 7, ARMENPRESS. The Speaker of Parliament of Armenia Alen Simonyan claims that the video recording showing him at an event discussing the Armenian prisoners of war is edited.

“The material is edited. I was speaking about the negotiations, about the state’s position in various situations. And I very much regret that our countrymen, who introduce themselves as supporters and request to ask a few questions, and I answer their questions, but then I notice that a young woman was pointing her phone at me. I asked not to be recorded because we were engaged in a conversation which I didn’t want to be public, and I don’t see a need for that,” Simonyan said, adding that he was assured that he wasn’t being filmed.

He warned that people who do such things must realize the criminal responsibility in their actions.

In the video Simonyan is seen talking about the Armenian POWs held in Azerbaijan. At one point in the video he says “the captives are those who laid down their weapons, fled and got lost,” and that “I consider that the captives are no more, they [don’t exist for me]”.

Asked to comment on what he said in the video, Simonyan told reporters that all troops who have laid down their weapons and surrendered into captivity will be investigated under criminal cases.

“Criminal cases will be initiated against all those servicemen who’ve laid down their weapons and surrendered into captivity, and if the investigations will reveal that they indeed did that. That’s not what I am saying, that is the requirement of the law,” Simonyan said.

The Speaker noted that there are numerous “hero men” in the Armenian military, describing them as the nation’s “pride”, but at the same time he said that there are some soldiers and officers who have failed to perform their duties and thus appeared in captivity.

He reiterated that the issue of POWs is always raised in the negotiations.

10:01, 01.17.2022
Viewed 1607 times French lawmakers call on Macron to demand apology from Aliyev for threats to presidential candidate after Artsakh visit