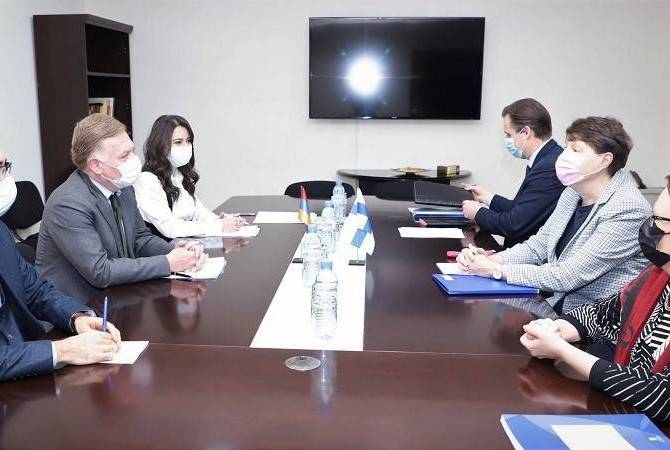 
YEREVAN, 6 DECEMBER, ARMENPRESS. Political consultations were held between Foreign Ministries of Armenia and Finland at the Ministry of Foreign Affairs of Armenia on December 6. From the Armenian side the consultation was conducted by the Head of the European Department of Ministry of Foreign Affairs of Armenia Tigran Samvelyan, and General Director of the Department of Russian, Eastern Europe, Central Asia Marja Liivala from the Finnish side.

As ARMENPRESS was informed from the Ministry of Foreign Affairs of Armenia, the sides discussed a wide range of issues of bilateral interest by emphasizing the importance of holding political consultations and high level visits on a regular basis.

The delegations of the two countries referred also to issues of broadening the trade-economic cooperation, exchanged thoughts about promoting the cooperation in sectoral directions.

On the same day Deputy Foreign Minister Paruyr Hovhannisyan received the delegation of Finland. During the meeting a reference was made to Armenia-EU cooperation, issues relating to the Eastern Partnership Summit to be held in Brussels.

At the request of the Finnish side, Paruyr Hovhannisyan presented the current situation created around the Nagorno-Karabakh conflict. In this context the necessity for a full resumption of the Nagorno Karabakh peace process in the framework of the OSCE Minsk Group Co-chairs’ format was stressed. As a member of the OSCE Minsk Group, the Finnish side reaffirmed its unconditional support to this framework.

During the visit the delegation laid flowers at Tsitsernakaberd memorial.