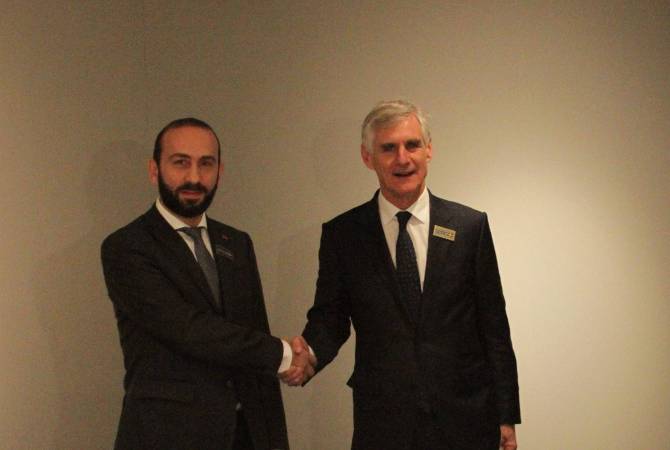 Minister Mirzoyan congratulated his counterpart on the occasion of assuming the responsible position and expressed conviction in further strengthening of the political dialogue between the two friendly countries and expansion of mutually beneficial cooperation, the foreign ministry said in a readout.

In the context of developing the trade and economic ties, the working of the Armenian-Austrian Intergovernmental Commission on trade-economic and scientific-technological cooperation was highlighted. The activation of contacts between the business circles of the two countries was emphasized.

The two Foreign Ministers also touched upon the activities of the Austrian Development Agency in Armenia. Minister Mirzoyan expressed gratitude to the Austrian Government for supporting Armenia's efforts in sustainable development.

The Foreign Ministers of Armenia and Austria discussed the collaboration of the two countries in multilateral formats, including within the EU and the OSCE.

During the meeting, Ararat Mirzoyan briefed Michael Linhart on the situation resulting from the recent aggression unleashed by the Azerbaijani armed forces against the sovereign territory of Armenia.

The Armenian side highly appreciated the position of the Austrian side on the comprehensive settlement of the Nagorno-Karabakh conflict under the mandate of the OSCE Minsk Group Co-Chairmanship.

The sides discussed the humanitarian issues requiring urgent solution, issues of protection of Artsakh's cultural and religious heritage in the territories fallen under the control of Azerbaijan, and unimpeded access of international organizations to Artsakh were discussed.