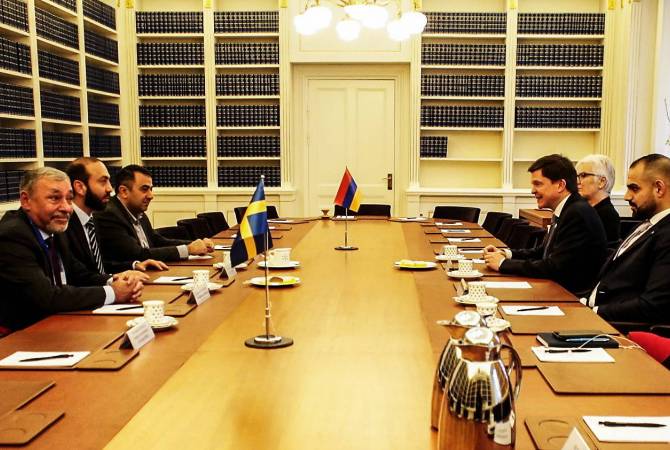 
YEREVAN, DECEMBER 2, ARMENPRESS. Minister of Foreign Affairs of Armenia Ararat Mirzoyan met on December 1 with Speaker of the Riksdag (Parliament) of Sweden Andreas Norlén on the sidelines of his working visit in Stockholm, the Armenian foreign ministry reports.

The sides remembered with warmth the official visit of the Swedish Parliament Speaker to Armenia in 2019.

Ararat Mirzoyan and Andreas Norlén touched upon the prospects of further developing the friendly relations between Armenia and Sweden, expanding the mutually beneficial cooperation in bilateral and multilateral platforms. FM Mirzoyan highly appreciated Sweden’s support to the ongoing democratic reforms in Armenia, the fight against corruption, as well as the support at the parliamentary level.

In the context of further deepening the Armenia-EU partnership, FM Mirzoyan and Speaker Norlén exchanged ideas about the effective implementation of the Comprehensive and Enhanced Partnership Agreement.

Minister Mirzoyan presented the current situation caused by the recent incursion of Azerbaijani armed forces into Armenia’s sovereign territory and the 2020 war in Artsakh unleashed by Azerbaijan. He emphasized the importance of a proper and addressed response by the international community in the context of de-escalation and stabilization of the situation in the region.