President Sarkissian meets with a group of future journalists 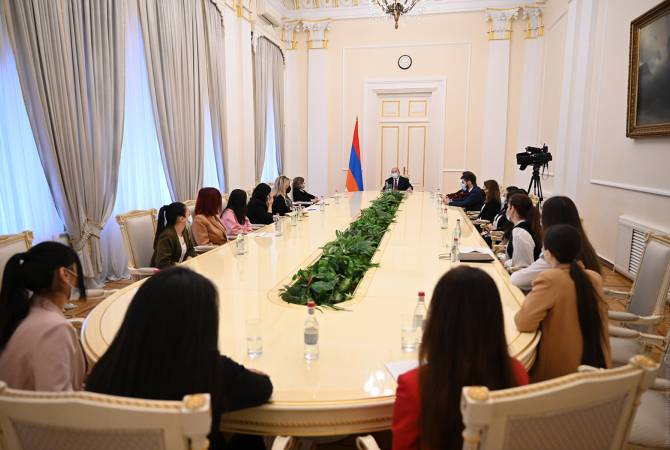 
YEREVAN, NOVEMBER 29, ARMENPRESS. President of Armenia Armen Sarkissian met with a group of students participating in EU-assisted “European media platform in Armenia. building reliable and professional media” program and the team working with them. The program is implemented by FactorTV in partnership with BBC Media Action and Deutsche Welle Akademie, ARMENPRESS reports the press service of the President’s Office informed.

In a conversation with future journalists, President Sarkissian, in particular, referred to the development prospects of Armenia, highlighted the creation of an open model state based on national identity, national values. “We are a global nation and the model of our country should be open”, the President said, adding that Armenia should pursue the policy of science, new technologies, high quality production, which can be exported. According to the President, for that it is important to follow the tendencies of scientific and technological development in the world, build our vision taking into account those tendencies.

“The small countries that understand their place in the future, become successful. Our only wealth are our people around the world, but we have decided not to use them. We teach the Diaspora that their only function is charity, we do not encourage the Diaspora to invest. We must create all the conditions to allow their participation in the development of our country”, the President said.

The President noted the open model of the state will also prevent emigration. “Today, many Armenians, reaching succeed, first think about leaving Armenia. If the society was open, people would not think about leaving”, President Sarkissian said, adding “For that I say today that we need to change the Constitution. It’s not important if it will be presidential of parliamentary, the important thing is that the power should be balanced. You need tools to be able to exercise restraint.”

The President also highlighted the comprehension and preservation of national identity. "The meaning and purpose of our life as a nation stem from the identity. You need to know exactly who you are as an individual or as a nation, what you live for. Identity is also the passport of the state."

President Sarkissian urged future journalists to be committed to the values and principles of journalism, to be able to keep pace with the time, to raise journalism to a new quality through their work.

The President of the Republic also answered the questions of the future journalists.