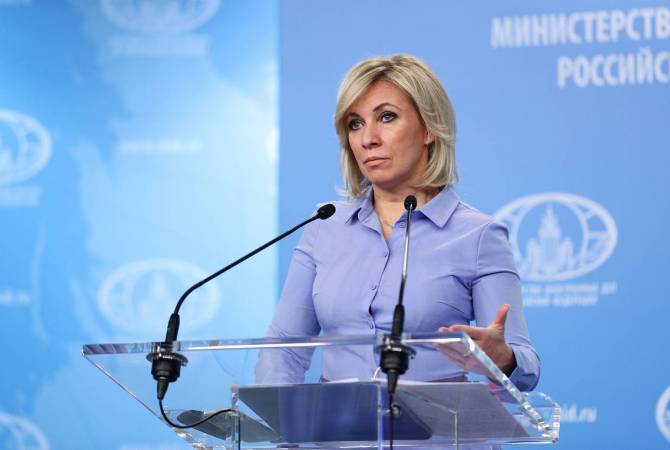 
YEREVAN, NOVEMBER 3, ARMENPRESS. The Russian Federation will make an extended comment over the anniversary of the agreement signed on November 9, 2020 between the leaders of Armenia, Azerbaijan and Russia, ARMENPRESS reports representative of the MFA Russia Maria Zakharova said in a briefing.

“Now I can say that works are underway in all directions”, Zakharova said.

She reminded that recently the Russian Foreign Minister had telephone conversations with his Armenian and Azerbaijani counterparts. “The ministers agreed that the situation in the region has stabilized over the past year, and the ceasefire regime is generally maintained. Baku and Yerevan highly appreciate the role of Russian peacekeepers. Individual incidents are handled through partnership-based contacts. Efforts are being made to unblock transport links”, Zakharova said, reminding of the meeting of the Deputy PMs of the three countries in Moscow in October. "We see a comprehensive solution to the problem with the delimitation of the Armenian-Azerbaijani border and the beginning of the demarcation process. Of course, active works are done by the OCE Minsk Group”, Zakharova said.

Answering the question about the possible signing of new documents in the near future, as well as a possible meeting of the leaders of Russia, Armenia and Azerbaijan, the representative of the Russian Foreign Ministry said. "I do not have such information yet. Let's let the question be answered by the leaders and their press services. If they have such information, they will share it with us”.

Referring to the announcements on the putting into operation the 3 + 3 platform in the region and the issue related to the position of the Russian Foreign Ministry on it, Zakharova said. "We support the idea put forward by the presidents of Turkey and Azerbaijan to establish such a regional consultation mechanism. It is called 3 + 3, we are talking about the countries of the South Caucasus and their neighbors: Azerbaijan, Armenia, Georgia, Russia, Turkey and Iran. Of course, we think it is time to put these plans into practice. Multilateral regional cooperation is in the interests of all participants of this platform. In our opinion, its implementation will increase confidence in interstate relations, in the settlement of conflicts, will open the economic and transport potential of the region. The platform can and must offer solutions to both old problems and new challenges”.