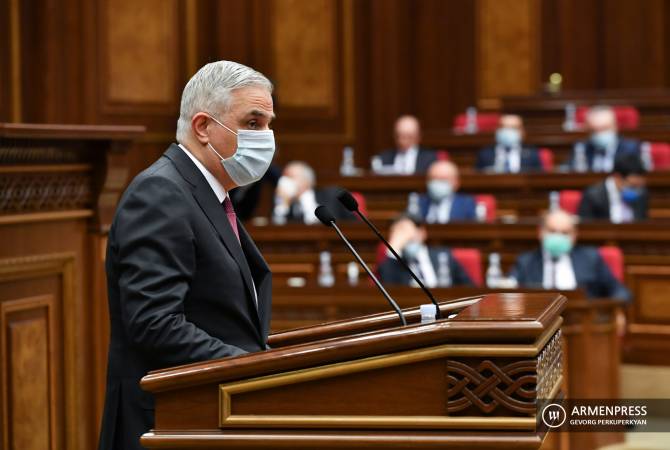 
YEREVAN, 27 OCTOBER, ARMENPRESS. The issue of restoring the Southern Railway is being discussed within the framework of the trilateral working group on unblocking the transport and economic ties of the region, Deputy Prime Minister Mher Grigoryan said during parliament-Cabinet Q&A session, referring to the question of Artur Khachatryan from ''Armenia'' faction.

''We organise the works of the trilateral working group in the framework of the January 11 statement, we do not go beyond the content of that statement'', said Grigoryan.

Referring to the possible map published by ''Komersant'', Grigoryan noticed that it referred to the option of the railway-highway passing along the southern border together. ''The railway, yes, is discussed. The issue of restoration of the Southern Railway is discussed, road – no, is not discussd because there is nothing to restore, there was no road”, said deputy Prime Minister.

He emphasised that it is about unblocking in classical sense, that is to give opportunity to all countries in the region to mutually use the existing infrastructure.

“With regards to the roads at this moment there is no consensus yet, suggestions are many, but to say that already there is a prepared map concerning highways, whether which will be used according to the priciples told by me, there is no joint statement yet, joint perception. With regards to the railway there are more common perceptions, approaches. But here I think the question is simpler.'' said deputy Prime Minister.

A trilateral working group was created on unblocking th economic and transport ties of the region, Co-chaired by deputy prime ministers of Armenia, Russia and Azerbaijan.