Pashinyan-Aliyev meeting for November 9 not planned at this moment, says FM 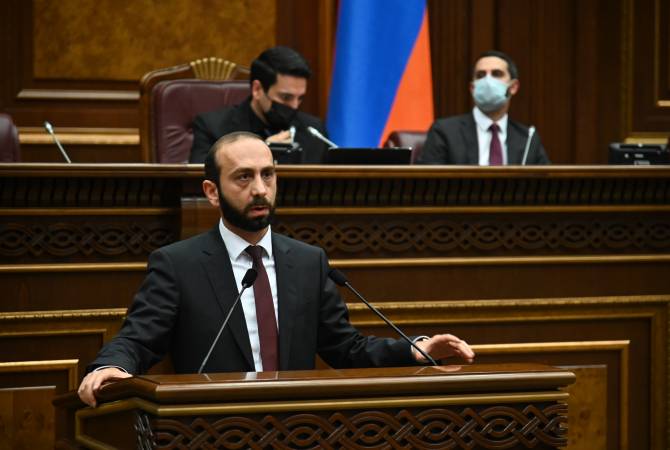 
YEREVAN, OCTOBER 27, ARMENPRESS. Foreign Minister Ararat Mirzoyan said that as of this moment a meeting between PM Nikol Pashinyan and Azerbaijani President Ilham Aliyev is not planned for November 9.

Mirzoyan was asked by MP Sona Ghazaryan to comment on the reports claiming that there is a meeting planned between Pashinyan and Aliyev for November 9 and moreover that according to these reports documents pertaining to the demarcation, delimitation and reopening of communications will be signed.

“At this moment no meeting is planned in that format,” FM Mirzoyan said.

“At the same time, both at this moment and regularly, almost constantly proposals on different meetings in different formats are being discussed. As a result of such possible meetings there will supposedly be the publication of some agreed-upon text,” he said.

“The signing of documents with the two discussed contents is definitely not planned,” he added referring to the media reports.

“Those meetings have numerous applied significance for us, they can create opportunities to address the entirety of the post-war humanitarian issues, first of all the possible speedy release of prisoners of war and forcefully held civilians, as well as the issue of Armenian cultural heritage monuments in territories that have gone under Azerbaijani control and numerous other issues,” FM Mirzoyan said.

In a broader sense the FM said that such meetings are a chance for de-escalating the tension in the region and to subsequently make efforts for ensuring lasting stability and peace.

“This is our motivation for attending such meetings. Proposals on such meetings in various formats exist,” he said, adding that usually such meetings result in statements being published.

He noted that the negotiations have a classified component. “But I want to assure for yesterday, today and tomorrow, that in all negotiations held behind closed doors our positions are 100% in line with the publicly stated positions of our political team, the prime minister and others, our positions don’t take any millimeter back, and aren’t more either.”