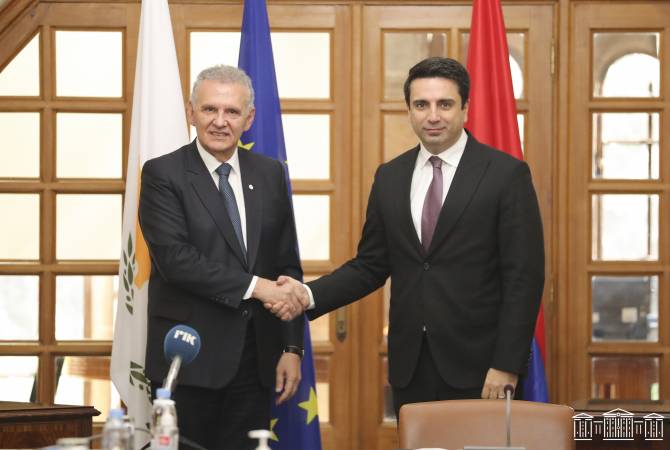 The Armenian Speaker of Parliament thanked for the meeting and the warm welcome, adding that the common value systems between Armenians and Cypriots are the basis of the centuries-old Armenian-Cypriot friendship.

Both sides emphasized the importance of the constant efforts by Armenia and Cyprus aimed at preventing genocides, as well as the joint fight for the preservation of universal rights and values, the restoration of justice. Alen Simonyan said that the principled position of the Cypriot authorities and all partners of the Parliament on all matters relating to Armenia and its people are invaluable.

The Presidential Commissioner highlighted the role of the Armenian community in Cyprus from the perspective of developing the bilateral ties. He presented details about the state care provided for the preservation of the Armenian schools and church in Cyprus.

The sides also discussed the 2020 military aggression of Azerbaijan against Artsakh, in particular the issue relating to the missing persons, the prisoners of war and civilian captives.

The Presidential Commissioner said that the Armenia-Cyprus-Greece trilateral relations are among the priorities of Cyprus. He informed that it is planned to open an exhibition relating to the Armenian and Greek genocides in the Armenian-populated Greek city of Thessaloniki.

At the end of the meeting the sides expressed confidence that the implementation of joint programs will contribute to further expanding the existing excellent relations between Armenia and Cyprus.