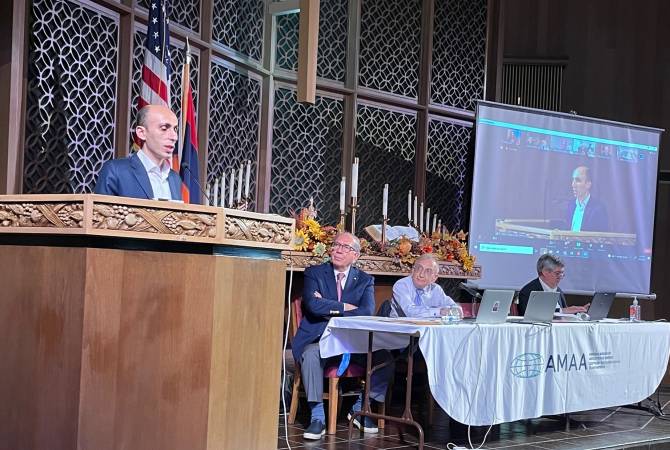 
YEREVAN, OCTOBER 26, ARMENPRESS. The State Minister of the Republic of Artsakh Artak Beglaryan participated in the annual assembly and charity dinner of the Armenian Missionary Association of America (AMAA) in Fresno, California, the State Minister’s office said in a news release.

He addressed the participants with a special message.

In his remarks, Beglaryan highly appreciated AMAA’s decades of charitable activities in Artsakh, characterizing it as "demanded and effective" especially in social and educational sectors.

State Minister Artak Beglaryan comprehensively presented the current political and humanitarian state in Artsakh, as well as the future-oriented approaches and programs.

He underscored the Armenian Diaspora’s significant role in Artsakh’s past, expressing certainty that the united efforts of all Armenians around the world will continue in the direction of the future restoration and development. State Minister Beglaryan stressed that their expectations from the Diaspora aren’t as much as material ones as in the form of human capital, which can create serious opportunities for the long-term development and strengthening.

Beglaryan noted that the people of Artsakh are resolute in living and creating in their own homeland, stressing that albeit through long and difficult struggle it will be possible to reach a final resolution of the Azerbaijani-Karabakhi conflict and the international recognition of the independence of Artsakh.

AMAA Executive Director and CEO Zaven Khanjian said in his remarks that they will expand their programs in Artsakh and the raised funds will be directed especially for social and educational programs.