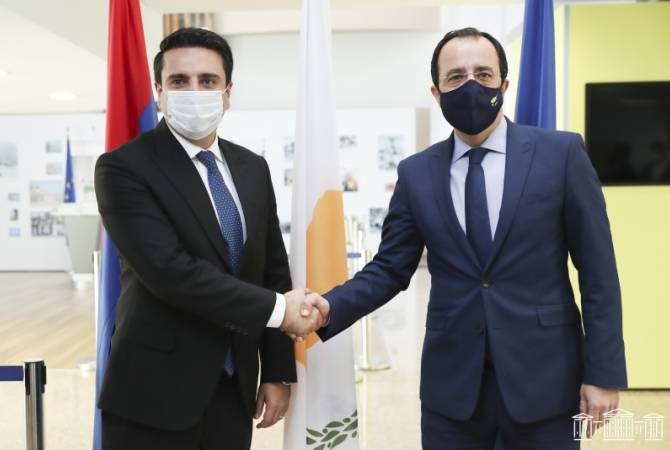 
YEREVAN, OCTOBER 25, ARMENPRESS. The delegation led by President of the National Assembly of Armenia Alen Simonyan met with the Minister of Foreign Affairs of the Republic of Cyprus Nikos Christodoulides on October 25.

As ARMENPRESS was informed from the National Assembly of Armenia, Alen Simonyan highly appreciated the effective cooperation between the two countries in bilateral and multilateral formats. He attached great importance to the soon launch of the Cyprus-Armenia-Greece parliamentary cooperation format, especially in the situation created after the 44-day war. In this context, the sides exchanged views on regional security and stability issues.

The sides referred to the Cyprus issue. The President of the National Assembly of Armenia noted that Armenia will continue to support Cyprus in international organizations and is in favor of a peaceful settlement of the issue through negotiations, based on the principles of the UN resolutions. Both sides agreed to do their utmost to further strengthen cooperation and friendship. The Minister of Foreign Affairs of Cyprus emphasized the invaluable role of the Armenian community in the public and political life of Cyprus

The sides also referred to the full use of the opportunities of the Armenia-EU Comprehensive and Enhanced Partnership Agreement in the context of the development of Armenia-EU relations.

The interlocutors discussed the investment opportunities of the Cypriot side, emphasizing the importance of economic and tourism cooperation with Cyprus.